Audiobook Review: Catch Me When I Fall by A.L. Jackson, narrated by Virginia Rose & Jason Clarke 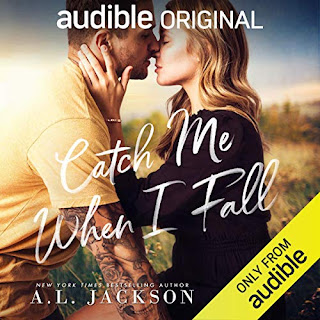 Note: The audiobook was provided by Audible Original.

“Are you looking to be?”

Oh, my heart! When A.L. Jackson publishes a new novel, I know I'm in for an emotional read. This time around, however, it's not a new book that I find in my hands, but a new audiobook. Catch Me When I Fall is an Audible Original, meaning it's being released in audio format first, waiting several months before it's out as an eBook and in paperback. I may have a wee bit of an addiction to Audible Originals because of my love for audiobooks and the fact that a story gets to hit my Audible app before it does Kindle app, makes me all giddy. Not only is this Jackson's first foray into the world of Audible Originals, but this title also happens to be the first in her brand-new Falling Stars series, which is a spin-off of the author's Bleeding Hearts series. For the record, I have yet to read the six much-loved titles that are part of the aforementioned series, but after listening to this new book, my curiosity has been piqued and you know what they say about curiosity: it kills my oh-so-woefully disorganized reading schedule!

Catch Me When I Fall is the story of Royce Riley, a record executive at Milton Records, and Emily Ramsey, a songwriter and the lead singer for Carolina George. I've been trying to figure out a way to write this review without giving anything away in terms of the story line, and ugh, easier said than done. Basically, Royce being the Head of A&R for Milton Records is tasked to get up-and-coming country rock band Carolina George to sign with his stepfather's record company--the same stepfather and the same company that Royce hates with a passion. He has his reasons for working for Milton Records, but they're reasons only an extremely select few know. He's waited too long for his plans to come to fruition, but the pieces seem to finally be falling into place. He certainly doesn't need a distraction in the form of Emily, yet he can't seem to resist the draw to this beautiful yet broken woman with a voice that calls to him. When all is said and done, will Royce and Emily's love survive or become collateral damage?

I admit it: I like big angst, and I cannot lie. Okay, I'm good with any amount of angst in the books I read, but there are just certain authors whom I expect it from simply because they do weave it into their stories without hesitation or apology and do it well. Case in point: A.L. Jackson. She has a way with words, and she's never failed in tugging my heartstrings, but I've never felt that she does the angst simply for dramatic effect. When you learn of everything that Royce and Emily have gone through, you understand why their story when they get together is as heavy as it is. That's not to say that there aren't lighter moments in the book--there are, and they do help in balancing out the more emotional and intense scenes throughout the story. I loved Royce and Emily, and these two so deserved a happily-ever-after. This series starter also introduces readers to the supporting cast of characters, specifically the rest of Carolina George, that I'm sure we'll be seeing more of and what an impressive lot they were.

As far as the narration is concerned, both Jason Clarke and Virginia Rose have shown me how gifted they are as narrators, having listened to Rose once before and Clarke several times over the past year. Here, there was no denying that when it came to the main characters, both narrators did notably well bringing them to life. The different emotions and the push and pull that was ever-present between Royce and Emily were done justice with Clarke's and Rose's performances, respectively. That being said, I confess that I wasn't as huge of a fan when it came to how they voiced the supporting characters. Clarke made most of the other male characters sound rather...blah. Dare I say that they sounded somewhat lacking in appeal, particularly Leif Godwin and Rhys Manning. With them being part of the series going forward, I wanted them to sound... more. Rose did a tad better with her supporting characters. Taking all things into consideration, Catch Me When I Fall still receives five-plus stars overall. ♥

Purchase Catch Me When I Fall on Audible.