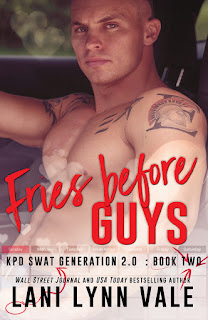 Fries Before Guys is the second book in the KPD SWAT Generation 2.0 series from Lani Lynn Vale and features Derek Roberts and Avery Flynn (whose name makes me think of the bestselling romance author she shares it with). This pairing was hinted at in the first book, Just Kidding, but you don't need to read the series starter in order to enjoy this second story. In short, it's a standalone, so if Vale is a new-to-you author, this can easily be your introduction.

Everyone in Kilgore knows the story of Avery Flynn. She lost her parents--both of whom were in law enforcement--in separate but equally sudden and terrible circumstances. Now nineteen, she's just trying to earn a living with her photography while finishing up high school. She doesn't have time for someone like Derek Roberts, especially since he made it painfully clear that he wasn't the least bit interested in her when he rejected her invitation for burgers.

As a member of the Kilgore Police Department's SWAT Team, Derek Roberts has stared down danger numerous times. Acting on his attraction to Avery Flynn, however, is a whole different kind of danger. There's the age difference and the fact that she's still in high school. When her life is threatened, though, Derek swoops in, ready to rescue her. But Avery would rather swat his efforts away than have this particular hot SWAT officer help her out.

Book number two in the series was a pretty good read. I know Derek made a lot of fuss about the age difference between him and Avery, but if I remember right, he's only in his early twenties, so it's not like he was a decade older than her. It took a whole lot for me to warm up to him given the manner in which he treated Avery. I get it; she was a high school senior, but he could have explained the situation to her rather than make her feel rejected.

Of course, there's a mystery slash suspense element to the story, and it was certainly a curious one. You would think someone who had gone through what Avery did would have inspired empathy from her peers. Instead, the main bully was truly over the top and the whole angle regarding her parents and their relationship was just...weird. Avery and Derek finally having sex was quite awkward, too. All things considered, Fries Before Guys gets 3.5 stars. ♥

Read my reviews for the KPD SWAT Generation 2.0 series: