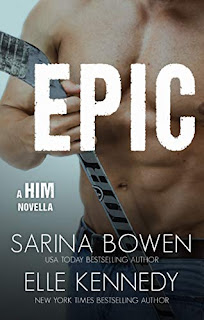 His teammates swarm the ice and I lose sigh of him in the massive show of celebration, but I know he must be over the fucking moon. And I'm glad for him. He deserves every bit of praise that's going to be poured on him tonight.

He deserves the world.

I'd originally read Epic when it was part of a multi-authored Christmas anthology last year, and well, this sort of fabulous story deserved a re-read. Written by Sarina Bowen and Elle Kennedy, this novella features one of my all-time favorite couples, Ryan Wesley and Jamie Canning from their Him duet, AND appearances from another favorite Bowen-Kennedy couple of mine, Blake Riley and Jess Canning from Good Boy.

Bowen and Kennedy certainly do not disappoint and give fans and readers of this series an extra bit of HEA. Wes and Jamie are still very much happily married to each other and are making names for themselves as a player and a goalie coach, respectively. Change could be imminent, however, and may not only find them in different cities but also opposing sides.

Bowen and Kennedy gift fans who have been clamoring for more from WesMie with a story guaranteed to leave everyone smiling. I honestly couldn't stop grinning while reading this. Epic had me giddy with much satisfaction and was truly an epic final chapter (gasp!!!) to the the story of Wes and Jamie. Le sigh. Five-plus stars. ♥

Read my reviews for the Him series:

Him (book one) - five-plus stars - My Review