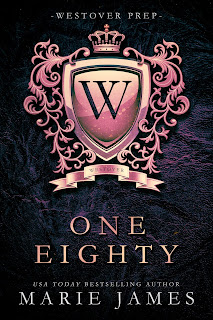 It's been a couple of years since a Marie James book was last on my tablet, but what a return it's made! James delves into new adult (NA) romance with a series starter that has undoubtedly set the bar high, not just for whatever follows next but also for other upcoming books in the bully romance sub-genre. One-Eighty introduces readers to the world of Westover Prep, a private school known to cater to the children of the wealthy and privileged. Seventeen-year-old Piper Schofield, however, doesn't consider it a privilege to be the target of bullying.

Dalton Payne may only be seventeen but he's an old hand when it comes to the art of bullying. Take for example his neighbor, Piper Schofield, better known as "Bloody Mary". Dear ol' Mary has been his favorite target ever since they were in kindergarten. For years, he's relished in tormenting her. She is as much the bane of his existence as he is hers, but when a car accident leaves Dalton stripped of nearly all his memories, nearly everything changes. Piper is still in his sights, only this time, he wants nothing more than to show her that he isn't the bully she once knew.

The bully romance has become a favorite of many, with some even using the term "alpha-hole" or "anti-hero" to describe the male main character--though these are not exclusively just for mature young adult or new adult reads. With a plethora of bully romance books flooding the market, it takes something extraordinary for a new release to stand head and shoulders from the rest. Well, Marie James's Westover Prep series starter is exactly that--extraordinary--and readers are rewarded with a unique story about love, trust, and redemption set in high school.

I love how complicated Piper and Dalton were. Their individual back stories and the story of their relationship--from bully and victim to smitten suitor and object of his affection--has layers upon layers that needed to be peeled back one at a time. There's nothing easy nor simple about Dalton trying to convince Piper that his feelings for her are true. He may want a chance to go from bully to boyfriend, but the stuff he and his friends did to her were cruel and abhorrent. Seriously, the boy could have been the poster child for teenage bullies with sociopathic tendencies.

Just like Piper, I needed to be convinced that post-accident Dalton was the real deal. Honestly, there were a couple of times where I wondered if this was yet another elaborate ploy for him to humiliate Piper. I don't want to give a whole lot away, but I will say that if you think you've already read every kind of bully romance there is, think again. Aside from Dalton and Piper, this had a stellar cast of supporting characters, some of whom I wouldn't mind reading more about, i.e. Frankie and Dillon (not together!). So, hop to it and get to reading One-Eighty. Five stars. ♥