Review: Something in the Air by L.H. Cosway (Running on Air #2) 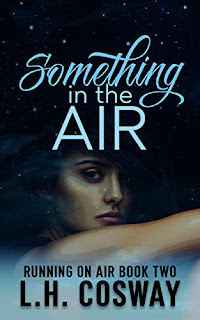 There's just something about Something in the Air that makes it feel...magical. This second full-length novel in L.H. Cosway's Running on Air series follows thirty-one-year-old James Khan, a cast member of a television program that follows a group specializing in parkour made up of five traceurs and one traceuse, and twenty-two-year-old Michaela Olsson, one of two personal assistants who works for the group. Michaela may have a bit of a crush on James. Okay, okay, she's desperately but secretly in love with the man, but things are complicated. Truly, madly, deeply complicated. You see, not only is James one of her bosses, but he also happens to be almost a decade older than her. Oh, and he's also kinda-sorta-maybe-very much engaged. Michaela knows her unrequited feelings are rather hopeless, so focusing on her job as a PA and keeping things professional is her only recourse. Then James asks her to stay in the home he's having remodeled. That shouldn't be too bad since he's currently living with his fiancée...until he calls off his wedding and moves into the home he owns--the same one Michaela is presently in.

This was such a fantastic read, one that takes the work place romance trope and sprinkles an extraordinary bit of something special that only someone like L.H. Cosway could pull off. I adored Michaela! She had her bouts of insecurity and shyness, but I loved seeing how she grew into her own, becoming someone who realized her worth and importance, not only to other people but also to herself. I found it so easy to empathize with her as well as to recognize chunks of myself in her. I liked that James always appreciated her and treated her with both respect and warmth. He considered her both his personal assistant and his friend, and he was simply an all-around good person. Do I wish he had realized what a terrible person his fiancée was sooner than he did? Yes, but then, the guy had a long happening professionally and personally, and sometimes, it takes a life-changing event to make you realize certain things. It was also great seeing the rest of the gang, and I'm eager to find out who we're getting next and when their book will be out. For now, let us all embrace the awesomeness of Something in the Air. Five stars! ♥

Read my reviews for the Running on Air series:

Off the Air (book one) - five stars - My Review

Purchase Something in the Air on Amazon.