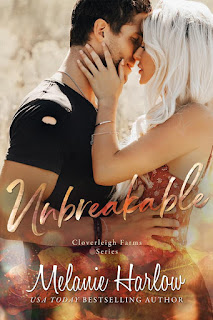 
I've enjoyed the heck out of Melanie Harlow's Cloverleigh Farms series. She's consistently brought her brand of heart and heat with the added element of home, and I've loved seeing how each Sawyer sister has found the love of their lives. The inevitable, however, has happened--I'm declaring a favorite, and it's book number four! Unbreakable is the latest novel in the series, and it's a story of not only finding love a second time but also allowing yourself to embrace that opportunity to build a life with someone new. With her three youngest sisters living their happily-ever-afters, it's now time for the eldest Sawyer sister to leave behind the life she had with her ex-husband in California in order to start a whole new chapter back in her home state of Michigan with her family.

Sylvia Sawyer may not have envisioned being divorced and a single mother to her thirteen-year-old daughter, Whitney, and ten-year-old son, Keaton, at the age of thirty-seven, but of she's honest with herself, her marriage died years before the divorce was final. Now that's she's back at Cloverleigh Farms, she has a chance at a new beginning with her kids. And then she started spending more time with winemaker Henry DeSantis. He may never have been part of her plans, but she's drawn to him in ways she never has been with anyone else. The chemistry is palpable and the fact that it's beyond physical is undeniable. But Sylvia has to consider how Henry's presence affects her children. She's always prided herself on being a mother first, but will it mean breaking her own heart?

Oh, the feels! Goodness but how this book had it in spades. It may have seemed like there was the whole insta-lust or insta-love thing going, but when you delve deeper into Sylvia and Henry's story, their respective marriages were over prior to them even considering divorce with their spouses. There were no shenanigans going on while they were married to their exes, so they were definitely free and clear to become involved with each other. The whole aspect regarding Sylvia's children was one that I could relate to having parents who separated when I was very young and went on to be with other people afterwards. While what was happening between Sylvia and Henry felt so easy and carefree, there were things--and people--to consider, highlighting that even true love is complicated.

Four books into the Cloverleigh Farms series and Melanie Harlow has managed to deliver a different story for each of the sisters--with April, the second oldest, left to tell her tale--which is no easy feat by any means. I liked that Sylvia and Henry were in their late thirties and aren't absolutely jaded but merely a bit cautious about being in love again. I certainly didn't foresee the direction that Harlow would take the story, but I appreciated the fact that it was different in the best ways possible. If I were hard-pressed to pinpoint something I was iffy about, it would have to be Sylvia saying that her son needed a male influence because I would hope that the influence we wish for our kids nowadays would simply be good and positive and have nothing to do with gender. But that's my own conviction at play. Other than that, I adored Sylvia and Henry's love story, enough so that I'm giving Unbreakable five-plus stars. ♥