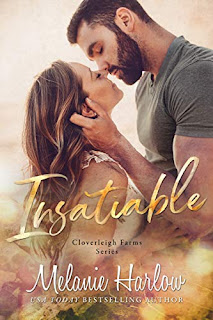 Melanie Harlow is back with the third novel in her Cloverleigh Farms series, and this friends-to-lovers romance was every bit as wonderful a read as I'd hoped it would be. Insatiable features the third of the five Sawyer sisters, thirty-three-year-old Meg, who works as a campaign strategist in DC. When her boyfriend of three years catches her by surprise when he tells her he's leaving to take a new job in Manhattan, his statement on neither one of them fighting for their relationship stuck with her, as did his pronouncement that Meg always put her job first. Deciding to head back home to northern Michigan earlier than she'd planned would give her some much needed time spent with family and her closest friend, Noah McCormick. Even though they don't talk on a daily basis, the bond she shares with him has been there ever since he saved her life when they were both sixteen. But right along that friendship is a spark that's quietly lingered, one that she's felt from the time she thought he wanted to kiss her at eighteen. If they give in to it, they only have a few days. After all, what hope can there be for anything more when Meg's career will take her back to DC and Noah has made it clear he can never be the boyfriend she needs?

I was beginning to wonder if any of the other couples in this series would be able to give Frannie Sawyer and Mack MacAllister a run for their money, then along came Meg Sawyer and Noah McCormick, and these two were every bit as endearing as the original couple that kicked off this great series. Meg's choice of Twinkies as her comfort food earned her bonus points with me. I mean, here was this successful woman who earned her law degree and now had a job she was really good at, yet there was this vulnerability to her as well. Now, Noah was far from perfect. There were times where I didn't know if I wanted to smack him upside the head or give him a smack on the lips. He was stubborn and bull-headed, but he was dedicated to his family and his job, a trait he shared with Meg. That's another thing I loved about this book; family was such a high priority for the main characters, and I thoroughly enjoyed seeing the family dynamics among the Sawyers and the McCormicks. With three of the sisters now living their happily-ever-afters, I'm guessing April's story is next and we get an idea whom she's paired with, and I have a feeling we'll be getting five books instead of four in this series! I can't wait! Five stars go to Insatiable. ♥