Review: Side Effects by Dee Palmer 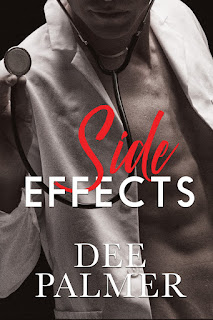 Note: An review copy was provided by the author via Give Me Books Promotions.

Originally released in July of last year under the title of Bone, this Dee Palmer novel now has a new title and cover. Side Effects is a second chance romance with strong erotic elements to it, but I wouldn't necessarily consider it suspense read, what with it being classified as "medical suspense". Labels aside, this was a story about a nurse and a doctor who were once a couple but went their separate ways. It was seven years ago that Joel Prescott first became a part of Regan Jones's life, but a year later, Joel gets a fellowship in New Zealand that would mean needing to be apart for the next five years. With Joel making his choice and refusing to make firm promises that he isn't wholly sure if he can keep, Regan makes a decision to end things. When she sees him again, it's with him as the new Head of Pediatrics in the same hospital where she's a nurse. There's no love lost between them, and over the next year, Joel solidifies his reputation as a ladies' man. Then they finally give in to the attraction that never quite went away. Like before, though, can there be a future for them if Regan is actively keeping secrets from Joel?

This was a pretty interesting read, with flashbacks that give an idea as to what Joel and Regan shared and lost in the past and how they're doing now that they're working together. There's a great deal of tension between these two erstwhile lovers, and while I wasn't exactly a fan of Joel's sleeping around--though I doubt the man actually did much sleeping when he was getting busy with the rest of the female population--he did make a concerted effort to make up for what they'd lost and prove that he was serious about being with Regan. Unfortunately, Regan was a woman who waffled about what it was she really wanted. Now, both Joel and Regan changed during their years of separation, the biggest being the fact that Regan was now a single mother (not a spoiler since it's mentioned in the official blurb). Her daughter, Ruby, plays a big part in the direction the story takes, and while I won't say how, what I will say is that it's probably not in the way that you think. Overall, Dee Palmer has penned a story with heart but far more heat. While this romance may not be my favorite from the author Side Effects was still a four-starred read. ♥

Purchase Side Effects on Amazon.