Review: In the Unlikely Event by L.J. Shen 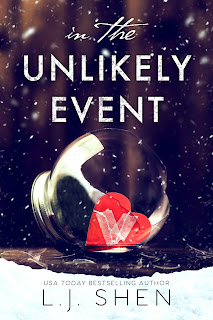 Knowing that L.J. Shen has a new novel in the works is like anticipating an event with a likely result: I'll love the book. After all, my track record when it comes to reading Shen's previous work has been consistent. I've always enjoyed her writing and I've yet to come across a book of hers that I didn't fall heart over heels in love with. Now, though, I find that I'm going to have to amend the second half of that statement. I was eager to get my hands on In the Unlikely Event, was tickled pink that I was actually approved for the advanced reader copy, purchased the book when I learned it was released early (which basically means I one-clicked even before I got around to reading the ARC), and now here I am, facing what used to be an unlikely event: I didn't love this new standalone, and it pains me to say that. To be honest, I struggled with the book in general, particularly the story and the cast of characters.

This was a second chance romance between an Irishman named Malachy Isaac Doherty and an American named Aurora Belle Jenkins. They shared a one-night stand in Tolka, Ireland that included an agreement jotted down on a paper napkin at The Boar's head that, on the off-chance that they would ever meet again, they'd be together, regardless of their respective circumstances or any consequences. Naturally, such an event was deemed unlikely by both Mal and Rory, and over the next eight years, their lives go on. Then the impossible happens. Mal is in the US, specifically in New York--Rory's New York. He's kept the napkin; will she keep her end of the promise they made?

I'm always appreciative of authors I love who decide to take a chance and write something different--something that their readers may not be expecting but will feed the author's creative soul while hoping for a welcoming reception. I loved the idea of this book because it had such amazing potential, and for all intents and purposes, L.J. Shen's writing remains as it always has been: original, creative, and unapologetically her. What I struggled with, though, was the direction the story took. There was a rape that occurred, and it was, indeed, rape because the victim acknowledged it as such. Here's the thing: the victim goes on to marry the rapist and have a family together. To make matters worse, there's a point much later on in the book wherein a child is named after the rapist--who, by then, has already passed away--in honor of their legacy. Really?! Am I in some weird alternative universe here?

Then there's the part in the blurb where Rory supposedly "adores" her boyfriend but it turns out, there's nothing adorable about him at all, yet she continues to be in a relationship with him even after she decides to stick to the agreement she made with Mal. Oh, and there's a whole lot of deception that goes on in the book. Lies are lies, whether they're by omission or not, and the fact that Mal actively kept pertinent information from Rory bothered me to the point that any saving grace he had was long gone. There's also the matter of the villagers who treated Rory like she was a woman who had a scarlet letter hanging around her neck made no sense to me. My feelings over this book wouldn't have been mostly negative had I liked Rory, but she lost points when it was clear that she had no backbone or self-respect, allowing people to treat her less than she deserved. Sigh. So, inasmuch as I've loved L.J. Shen's books and writing in the past, In the Unlikely Event wasn't my thing. I've seen many rave reviews for this, so it may be a case of "it's not you, it's me," but I'd rather wait for Shen's next romance instead. Two stars. ♥

Purchase In the Unlikely Event on Amazon.