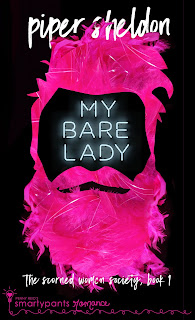 My Bare Lady is the first novel in the new Scorned Women Society series from Smartypants Romance, and it's my first read from Piper Sheldon. Here we have an older woman falling for a younger man and vice-versa. Okay, technically, she's only older by six months, give or take a few days or weeks. Actually, the story is about twenty-nine-year-old Suzie Samuels, a pole dancer with the well-earned nickname of "Short Fuse Suze" working at G-Spot, a strip club owned by the Black Demons motorcycle club, the same club that she ran to for protection after leaving the Iron Wraiths MC. Her path intersects with that of a buttoned up University of Tennessee professor named Clifford Rutledge. Suze wants more out of life, and with Clifford's help in changing her from who she is to who she can become, maybe she can move beyond who people think she is and be more than the girl who burned a man's motorcycle to a crisp. But Clifford needs her just as much as she needs him...maybe even more than he can admit.

I had an inkling that each series from Smartypants Romance was going to be set in existing book universes by author and Smartypants Romance head honcho Penny Reid. Here's the thing: I've, ummm, never read any of Reid's books. I know, I know--I am a sad, sad romance reader, but all I can really say in my defense is that there are so many amazing books out there regardless of genre but there isn't as much time as I wish I had in order to read everything. That being said, I've read three of the books that are part of Smartypants Romance first batch of published books--two from the Cipher Office series and one from the Scorned Women's Society series--and while there are mentions of who I suspect are characters from the Reid-penned series that inspired these multi-author spin-offs, the Cipher Office books worked well enough that I read them without feeling lost. With My Bare Lady, however, it did feel as if I was missing something because of Suzie's past with Jethro Winston of the Iron Wraiths.

Setting aside that lost feeling, I did like both Suzie and Ford, who truly were opposites but goodness how they just clicked somehow. There was awkwardness and some major bickering and back and forth, but that attraction and draw to each other was always there, and it was fun seeing them move towards strangers with a mutual need for something (other than sex) from the other to much  more. There's definitely a lot more to these two main characters than what you initially notice about them--Suzie with her tendency to not look before she leaps and Ford with his stiffness (no, not THAT kind of stiffness, you dirty-minded peeps out there) and discomfort--and I enjoyed getting to know who they really were and their respective back stories. With My Fair Lady as its inspiration--which, in turn, served as the musical adaptation of George Bernard Shaw's Pygmalion, both versions being personal favorites of mine--Piper Sheldon did a terrific job putting her own touch to My Bare Lady. 4.5 stars! ♥

Purchase My Bare Lady on Amazon.