Review: Demise of a Self-Centered Playboy by Piper Rayne (The Baileys #5) 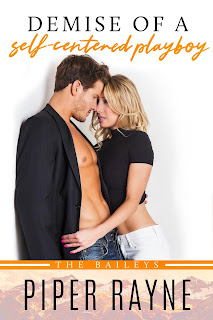 I catch Cleo's eyes soaking in my family. Yeah, they can be a bit much at times, intrusive to an unfathomable degree, but they already love her. If I'm honest, I think I love her too.


One of my favorite things about Piper Rayne's series about the Bailey siblings from Lake Starlight, Alaska is how readers see just how much they've developed from the first time a sibling is introduced to who they become by the time we get their book. Twenty-seven-year-old Denver Bailey--fifth among the nine siblings (making him the actual middle child) and twin brother of Rome, whose story was told in Birth of a Baby Daddy--has always been the one who took only one thing to heart and that was piloting a bush plane. He was the sibling who didn't do relationships and never took much responsibility for anything or anyone. Then the man he considered his mentor, Chip Dawson, passes away and shocks the heck out of Denver by leaving him half of the ownership of Lifetime Adventures. The thought of being in charge of a struggling adventure company is daunting to say the least, but to make matters even more complicated, his new co-owner is none other than Cleo Dawson, Chip's twenty-seven-year-old estranged daughter and only family. She makes no secret of how much she dislikes Denver, but she can't afford to buy his half of the business and he isn't interested in selling anyway. So, how are two people who don't like each other--yet pretend they aren't drawn to one another--supposed to save and honor Chip's legacy? Hello, reality TV!

Oh, Denver, Denver, Denver... There was a lot about him that I could seriously relate to, and not just because we both happen to be middle children (I'm the third among five siblings). He may have looked like he was just coasting by and enjoying the heck out of himself while doing so, but he was also quite lost. Yes, he loved being a bush pilot and he was good at being someone who led treks around the Alaskan wilderness, but he didn't have direction. As far as relationships go, well, I don't want to go into detail because that revelation plays out in such a heartrending way in the book and I seriously refuse to spoil it for those of you who have yet to read the book. With Cleo, I'll be honest and admit that I was a wee bit apprehensive when it came to her, but then I realized that she was just as lost as Denver and her reasons for disliking him were actually understandable. I'm not agreeing with how she felt, but I did have a better understanding of who she was as I got to know her better in the book. I loved how Denver and Cleo's relationship over time and how they did need to learn how to trust one another. As far as their respective families are concerned, the Baileys, as always take the cake, but I also liked Cleo's stepsister, Bridget, and I hope we haven't seen the last of her. It's safe to say The Baileys is my favorite Piper Rayne series to date, and Demise of a Self-Centered Playboy has now become my second favorite in this series so far and gets five-plus stars. ♥