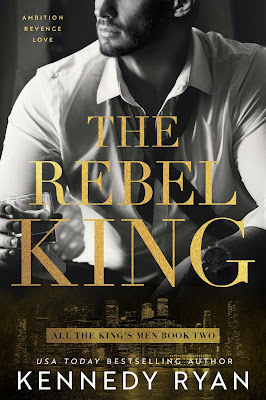 About The Rebel King
RITA® Award-winning author Kennedy Ryan delivers the gripping conclusion to the All the King's Men duet.

Raised to resist. Bred to fight. Survival is in my blood and surrender is never an option.

Though surrender is what Maxim Cade demanded of my body and heart, I had other plans. We were fast-burning fascination and combustible chemistry, but the man I trusted with everything was a trickster. A thief who stole my love. If what we had was a lie, why did it feel so real? The man I swore to hate will have it all, and wants me at his side. But power is a game, and we’re the pawns and players.

Facing insurmountable odds, will we win the world, or will we lose it all? 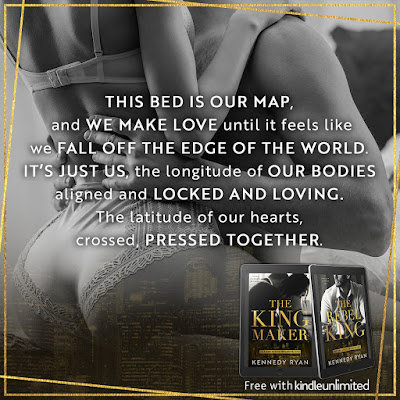 Read my four-starred review of The Rebel King.

Add The Rebel King on Goodreads. 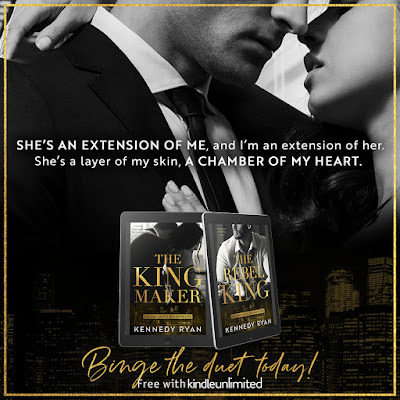 An Excerpt from The Rebel King
Her words break on a sob, and the elegant line of her shoulders trembles. “No one like you.”

I palm her breasts, squeezing the tight nipples between my fingers. Her in-drawn breath tells me she likes it.

“Anything you want,” she pants, circling her ass on me. “Take it.”

“I want today with you,” I say, changing the angle of my thrust slightly, but hitting a new spot that makes her moan.

I force myself to stop abruptly and start easing out.

I stop pulling out, but don’t move. She squirms, tries to grind on my cock, but I grip her hips, holding her still.

“Do you think I don’t feel how hard that cock is? You want this, too.”

“Obviously,” I force my voice to casual, like it doesn’t matter to me one way or the other. “But I want a day with you more. What’s it going to be?”

I push in and give her a quick, shallow thrust.

My cock hates me, silently cursing me in four different languages for not finishing this right now.

“One day,” she concedes breathlessly. “I can give you one day.”

I take off the reins and fuck her until we’re both shaking. We almost fall when our orgasms hit. I ease out, sit on the shower bench and set her on my lap. Greedy, thirsty, we kiss until my lips are numb, her fingers burrowing into my wet hair, my fingers tunneled into hers. I break the kiss, taking her face between my slick hands and searching her eyes.

She nods, sucking my bottom lip smiling. “One day.” 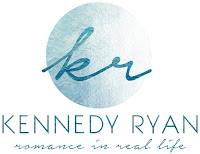