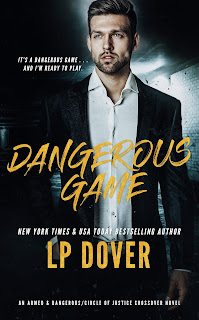 I've read and enjoyed L.P. Dover's Armed & Dangerous and Circle of Justice series, both of which are romantic suspense in nature, so when I found out that she had a crossover novel slated for release this month, I was anxious to see how the two worlds would merge. Dangerous Game is the title of the crossover book, and I'm not exactly one hundred percent sure but I think it's the first in a new spin-off series. Whether it's a series starter or a standalone, Dover's newest novel satisfactorily met the bar set by all the books in the two aforementioned series.

The empire Dominic Corsino's father built was founded on more than just dreams because being caught in the crosshairs of a Corsino was the nightmare of many. But his father is gone and Dominic is now at the helm and doing things differently, making a point of showing his family's enemies that he is not to be underestimated. Nothing and no one can get in his way...that is, until Faith Hilliard, his sister's best friend and the one woman he's always wanted but could never have. Yet maybe now he can, even if exposing her to his world would be dangerous.

Dangerous Game had the romance and suspense as well as quite a bit of angst (yay!). I loved the connection that Dominic and Faith shared, with the latter bringing some much needed calm to the former. As expected, because it is a crossover story, there are several characters from the author's Armed & Dangerous and Circle of Justice novels that make appearances, and that was definitely a bonus for me since I loved both those series. With a well-paced story and intriguing characters, L.P. Dover's Dangerous Game held my attention throughout, and it gets four stars. ♥