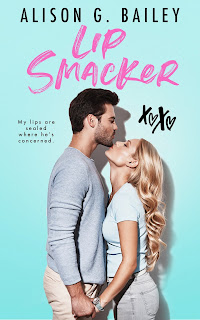 Lip Smacker is a romantic comedy read from Alison G. Bailey, and it's the story of two people with opposing agendas who are irresistibly attracted to each other. When she was fourteen, Elipheleta Smacker developed a mad crush on Logan Heath, a boy two years older than her who'd taken the time to help her out with a locker dilemma. Fourteen years have passed since then, so imagine her surprise when the boy she'd crushed on enters the bakery she co-owns with her grandmother, Wavy. Where he was cute as a teenager, Logan is as handsome as she expected him to be as a thirty-year-old. The reason for his crossing the threshold of her bakery, however, has Lip wishing he'd just up and disappear. You see, Logan's what's known as a "closer"--he's the lawyer that never fails to close a deal. He doesn't immediately recognize Lip, but soon enough, it dawns on him that she was the girl who went to the same high school as him--the girl who had a crush on him. The more time he spends around her, the more Logan realizes that he's developing a crush on her, too, but will his job and her bakery end up crushing their love?

This was a cute read, one that had a bit of quirkiness to it, mostly due in large part to Lip and her grandmother, Wavy. Lip's done a fair amount of growing up over the years, so she isn't the same timid girl she once was, which is why she doesn't hesitate to go toe to toe with Logan. However, as much as she hates the fact that Logan is representing the company who wants to buy her bakery and then destroy it, that crush she's been nursing for almost a decade and a half is still very much in the picture. There were moments that I found Lip endearing, but then there were other times where she did grate on my nerves a tad. On the other hand, Logan was a good guy, but he's earned his nickname because once he sets his sights on something, he's prepared to go after it by hook or by crook. These two were equally stubborn, but they were obviously meant to be together, and they were really easy to cheer for, hoping that everything would work out and they would get their happily-ever-after, no matter how complicated it would be. While Lip Smacker isn't my favorite read from Alison G. Bailey, it still gets four stars. ♥