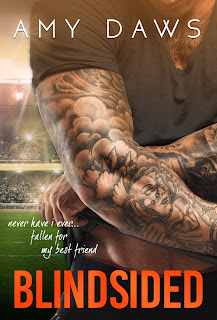 “Do you want to taste my cheese?” he asks seriously.

He tilts his head. “I asked if you want to taste my cheese.”

“Why are you talking about cheese? Go back to the tasting me thing.”

“You can taste his cheese but not mine?”

All. The. Bleddy. Feels! Blindsided is the second non-Harris sibling novel in Amy Daws's forever awesome Harris Brothers book universe, and it's lived up to the expectations I had, set as they are thanks to my absolute enjoyment of the other stories. This newest romantic comedy is, of course, still set in the world of football--aka soccer for those who prefer the Americanized label--and it features thirty-four-year-old midfielder Maclay Logan and twenty-nine-year-old fashion tailor Freya Cook. If you're familiar with the previous books, particularly, Payback, then you'll remember that Mac is Roan DeWalt's roommate, teammate, and best friend while Freya is Allie Harris's best friend and works for Sloan Harris, wife to the eldest among the Harris siblings, Gareth, and Leslie Clarke, designers and co-owners of Kindred Spirits. Now, you could jump in and read this book without having read any of the earlier books--Strength (re-titled and combining That One Moment and A Perfect Moment, which were originally part of Daws's London Lovers series), Challenge, Endurance, Keeper, End Goal (short story), Surrender, Dominate, and Payback--BUT allow me to nudge you along the path of enlightenment: GO READ ALL THE BOOKS!!!

Falling in love with your best friend is always a risk. It seems like a good idea from the perspective that this is the person who could very well know you most, so it's not as if there are skeletons in the closet that could derail a romantic relationship. On the other hand, if things do go wrong and you split up, the chance of you losing that person you trust most could be highly probable. In the case of Mac Logan and Freya Cook, they've only known each other for about a year but have solidified their friendship with constant text messages and Netflix and chilling (and not in a dirty way but in an actual chill and relax sort of way). They're absolutely comfortable with one another and have no trouble slinging back any sort of teasing or taunting the other flings their way. When Mac finds out that his fellow ginger needs a bit of tutoring in the ways of flirting and dating, he offers to help her out. What he doesn't expect to learn, however, is the fact that his best friend happens to still have her "maiden tag"--aka Freya is still a virgin at nearly thirty. Why not take it a step further by Mac offering to be the one to free Freya of her pesky virginity? Mac promises they'll stay friends; Freya promises not to fall in love. Who blindsides whom?

Let's play a quick game of Never Have I Ever! Never have I ever...come across an Amy Daws novel I didn't love! You can't see it, but I just took a couple of gulps of soda because not falling in love with and laughing my heart out because of any of this author's books is simply not possible. Of course, I haven't read ALL of her books yet (I still need to work my way through her pre-Harris Brothers and Wait with Me back list), but I have no qualms testing that theory out completely. Mac and Freya were a hoot and a half plus had heart and heat, so we've got all the good stuff that Daws always packs her romances with. One of my favorite things about Mac and Freya's story was the fact that they truly were just friends in the beginning and then it took a bit of curiosity and one kiss to spark something that may have been there all along or may have only come into existence soon afterwards. As easy as their friendship may have been, adding sex and romance can, indeed, complicate things, and Mac and Freya did have to figure out how to move forward with their new normal. I had all these thoughts and emotions brimming to the surface and mixed together while I read Blindsided and I so relished every single bleddy bit of it. Five-plus stars! ♥