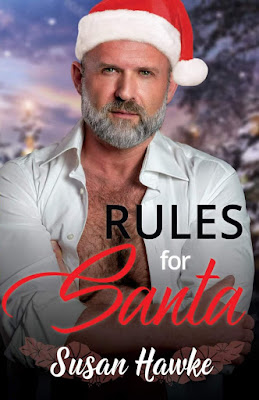 About Rules for Santa
Rule #18: Daddy’s boy will always believe in his Santa Daddy.

Homeless, alone, and now jobless, Cameron Evans is lost… until he’s found after a prominent local attorney literally trips over him when the boy is passed out from dehydration.

Scott Hendrickson has two things in life: his job as an assistant district attorney, and his son Davey. Other than that, he lives alone in a house that’s too big, too empty, too… lonely.

It’s not just Cameron’s life that might change for the better when Scott takes him in. Scott can provide material things and security, but Cameron returns the favor by breathing fresh air into Scott’s stale life.

Two men who need each other… one magical holiday season. Could a little Christmas magic be all that’s needed to bring the biggest gift of all? Maybe Cameron doesn’t need a Sugar Daddy… because he already has a Santa Daddy.


This is the third book in a series about not-so-perfect Daddies, adorable “boys,” and one sassy brat with an insane list of rules. Get ready for all the squishy holiday feels you’d want from a Susan Hawke book. 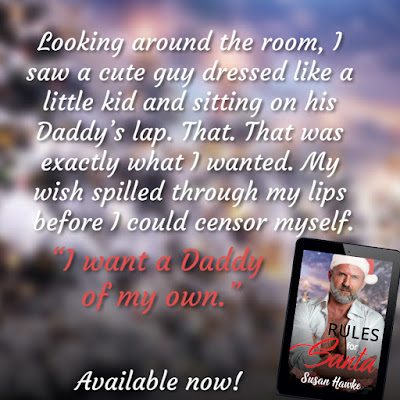 Read my 4.5-starred review for Rules for Santa.

Add Rules for Santa on Goodreads. 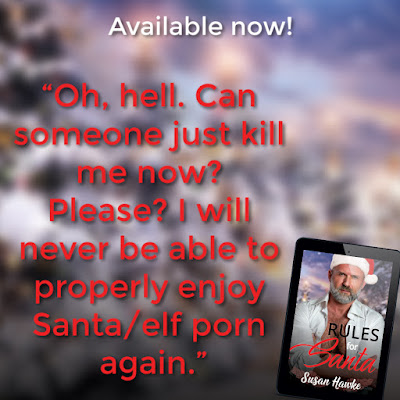 An Excerpt from Rules for Santa
After a sleepless night spent tossing and turning, I was up with the sun. Cameron came down right as I was pouring the fruit compote over a Belgian waffle. I noticed the backpack on his shoulder right off the bat.

His stomach growled—loudly—but he ignored it as he met my eyes. "I'm going to get out of your hair now. I just wanted to thank you for taking me in last night. I looked out the window and it's not raining right now, so I should be okay."

Shaking my head, I pointed to the island. "Drop your bag and come have breakfast. I didn't cook all this just for me, did I?" My chest fluttered when he instantly obeyed.

His cheeks were pink as he climbed onto the stool. "Sorry, I just didn't want to assume or impose. I thought you might be sick of me by now. But I suppose it won't hurt to stick around long enough to have breakfast, especially since you went to so much work."

"You’re not imposing at all. It's nice to have a little company in the house." I figured we would discuss his leaving later. First… food.

"Wow, that's a beautiful compote. You reduced it perfectly, I won't even need syrup." Cameron smiled brightly as he looked at the plate I set in front of him. There were already platters of scrambled eggs and bacon on the counter, along with a container of freshly squeezed orange juice. I might have been a little too busy.

"I just hope you like waffles." I spoke casually, setting a carafe of coffee on the counter along with a container of cream and cups for each of us. "I wasn't sure if you drink coffee or not. If not, that just means there'll be more for me."

His eyes were closed as he moaned around his first bite of waffle. I wasn't sure whether to be pleased or turned on. Maybe a bit of both? After he swallowed, his eyes popped open and he reached for the coffee. "I'm not a huge coffee drinker, but I don't hate it. Especially with a rich breakfast like this, I’ll definitely want coffee today." 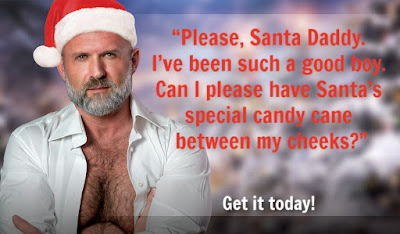 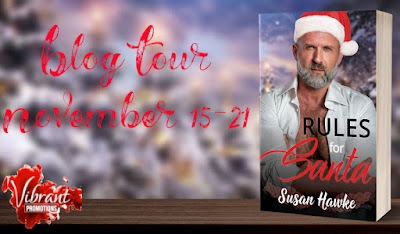