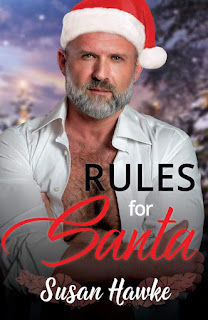 With the cooler weather and Christmas already being in the air, I've been looking forward to reading more and more holiday romances, and Susan Hawke's third novel in her Davey's Rules series definitely doesn't disappoint. Rules for Santa is all about Scott Hendrickson, father to none other than the eponymous Davey--although Scott prefers to call his twenty-seven-year-old son by his given name of David--and a workaholic assistant district attorney who wants for nothing when it comes to wealth, and Cameron Evans, a young man who is down on his luck after being kicked out by his homophobic father. When forty-eight-year-old Scott finds a nearly unconscious Cameron in a dark alley, his protective instinct kicks in. Soon, he offers the twenty-year-old a place to stay and feels for him when he learns Cameron's heartbreaking story. The two men form a strong bond in a very short period of time, and if they're being absolutely honest, they're also wildly attracted to one another. But with a nearly three-decade age difference, insecurities, and doubts limit the chances of a Santa Daddy and his special elf finding love?

Among the three novels in the series, this is probably the one I would label the sweetest, almost to the point that it may have been a tad sweeter than I'd expected. Scott is as smitten by Cameron as Cameron is with Scott, and while it may take more than three quarters of the book before anything sexual happens between the two of them, there's a level of intimacy that slots into place from the moment Scott rescues Cameron on that fateful night after Cameron loses his job after being distracted by his sudden crush on Scott. Admittedly, this isn't my favorite book in the series, although I still thoroughly enjoyed the heck out of it. It just felt as if so much was happening in such a short amount of time that even though these two main characters were spending a whole lot of time together, the author didn't delve into the actual development of the relationship as much as she usually does, so we don't see it progressing organically and instead get these shifts from one point to another quickly. That being said, Rules for Santa was a holiday romance that brought a smile to my face, and it has me curious about who's up next. 4.5 stars. ♥

Purchase Rules for Santa on Amazon.