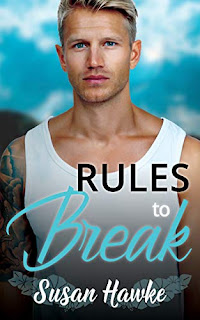 “Be the boy that I know you were meant to be.”

“And what kind of boy is that, Daddy?” My voice was husky, coming from a throat thick with emotion.

Daddy leaned in so close that his breath warmed my lips as he murmured his response. “What kind of boy? The best kind, brat. Fifty-one percent sassy and forty-nine percent sweet.”


Susan Hawke's Davey's Rules series is only her second under this particular pen name--her other one being Susi Hawke--but it seems that it could very well just be as good as her Lovestrong books, which I may still be rather obsessed over all these months later. This newer series got off to a great start with Rules to Follow, and things got even better with Rules to Break. Twenty-five-year-old Preston Wallace was a brat and he knew it. With a reputation that preceded him--and one that he fully acknowledged--Preston made no apologies for his bad behavior. After all, it wasn't his fault that he was young, hot, and rich, right? So, he isn't all that surprised when a bet is made between two Daddies at Daddy's Lap, a private club many who were into the Parent-little kink frequented. If thirty-five-year-old Bryan Miller--a Daddy who had no boy of his own and doesn't believe in commitment--can teach Preston how to be the perfect boy in three months' time, then he wins the bet. In order to make it work, Bryan knows Preston needs to move into his home. Close quarters and simmering desires may lead to rules being broken.

Preston made quite an impression in the series starter, and not in a good way. He was rude, abrasive, and entitled, but he very much redeemed himself in this second novel. Now, the transformation wasn't what I'd call a total one. He still retained some of that bratty behavior of his, but I loved seeing how he become more self-aware of the not-so-positive aspects of his personality. I also had a better understanding of why he was the way he was. Of course, he wasn't the only one who experienced his own epiphanies. Bryan was a good guy who simply never wanted to settle down because he didn't believe in emotional entanglements that would lead to commitment and the like. He had his reasons, naturally, but I did find it quite fitting that the one person he would end up having a true connection with was someone as bratty and spoiled as Preston. There were some laughs and numerous grins, but this book also brought about some tears, but I won't go into why. You'll see for yourselves once you pick up Rules to Break, an ultimately heartwarming story about love, change, and acceptance of self and others. Five-plus stars. ♥

Purchase Rules to Break on Amazon.