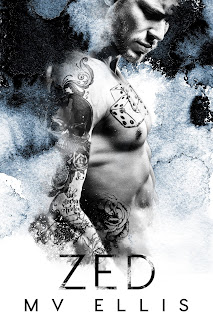 Note: A review copy was provided by Hot Tree Publishing.

Zed isn't my first MV Ellis read; that honor belongs to Break You, the Boys of Trinity Hall series starter, and because of the ties of one of its main characters, Xavier Cross, to Zachary Davies and Octavia Douglas--aka Zed and Vivi--I found myself wanting to know more about them and how those ties were formed and strengthened. So, that's why I decided to take advantage of the fact that the second novel in the Rough Ink series was going to be released and that review copies of the first book, Zed, were being made available for reviews by the promotional arm of Hot Tree Publishing. I'm so glad I was able to dive into this series (yes, I read the first and second novels one after the other) because they've shown me that my original experience of Ellis's writing wasn't a fluke and that I want more.

Zed Davies is as enigmatic as a man with a haunted past can get, barely sharing much of anything about himself. So when Vivi Douglas enters his life by way of a troubled teenager, it takes a whole lot to peel back Zed's many layers. His fortified walls were nearly impenetrable, but then it took someone like Vivi to get through them. I thoroughly enjoyed getting to know these two and how their relationship evolved from strangers to lovers and even far more than either one could have predicted. Zed was very much an alpha male, but Vivi was no shrinking violet, and I think that it took a woman with her confidence and strength that Zed needed in his life. The chemistry between the two of them was palpable, but aside from the romance aspect of their story as a couple, I liked learning about who they were as individuals and how they became they people they were today. Zed was a definite five-star read. ♥