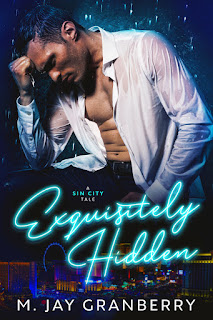 Note: An advanced reader copy (ARC) was provided by Weapenry Co-Op via NetGalley.

M. Jay Granberry was a new-to-me author before I started reading the two currently available novels in her Sin City series. Exquisitely Hidden is the newest release, and it takes place during the events found in the series starter, Exquisitely Broken. This is an M/M rock star-bodyguard romance with Adam Beckham as the former and Seth Cody as the latter. You could try and read this second book as a standalone, but because the main characters from the first book, Sinclair James and Jacob Johnson (aka Sin and Jake) are supporting characters here, with the heroine from there playing a pivotal role in this story, what with her being one of the heroes' foster sister slash best friend slash band mate, I'm going to recommend you read the books in order. Seriously, I was glad I did exactly that or else I would have been frustrated wondering about certain goings-on which occurred to and between Sin and Jake.

Adam Beckham takes his job as the front man of Sin City to heart. He's protective of his band mates and doesn't want anything or anyone to derail everything they've worked hard for. Now, with the sudden passing of his estranged mother, Adam learns that he has a three-year-old sister named Victoria and that he's her closest living relative. He needs to hold everything together, so the last thing he needs is to be as involved as he is with Seth Cody, one of the close-in security assigned to the band. Adam can't risk losing custody of Tori or to draw negative attention to Sin City, so coming out of the closet is never going to happen. The best thing to do is to end whatever it is he has with Seth, but when the connection is as strong as theirs, letting go isn't as easy as he may have hoped.

When it came to the first book, I was impressed with M. Jay Granberry's obvious ability when it comes to penning a romance with angst. Alas, the second book suffers from the same thing its predecessor did and that's the push and pull between the main characters that leaves me mostly frustrated. Adam was gay but in the closet; Seth was gay and out and proud. They're attracted to each other and there may even be genuine enough feelings that go beyond lust, but while Adam makes it clear he isn't going to come out about his sexuality, you could see that Seth holds out hope that what they share will be enough for Adam to change his mind about keeping them a secret. The back and forth got tiresome, and had me wishing Adam would stop being selfish and Seth having more self-respect. There were also a number of little things with the writing itself that niggled at me, for example, the use of "I'm a head out" instead of "Imma head out." So, while Exquisitely Hidden did hold promise, it faltered. Three stars. ♥