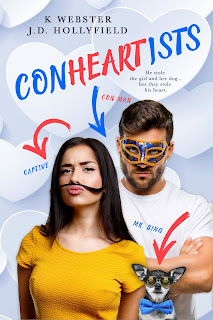 When I found out that K Webster and J.D. Hollyfield were writing a brand-new romantic comedy read, I was a very happy camper. After all, I fell in love with this duo's writing when they joined forces and created the 2 Lovers series a couple of years ago. Their newest release is entitled Conheartists and features a twenty-two-year-old store owner named Francis Connor (who is very much female even if she has a guy's first name) and her Chihuahua, Chandler Bing, aka Mr. Bing, and a twenty-seven-year-old con artist named Luca Crawford. Their story is kooky and hilarious and just as fun as I expected it to be. The direction the story takes, however, was unexpected in the best way possible, making this rom-com one of the more original, entertaining reads that I've come across so far this year.

Luca Crawford is a man who has swindled his way through life, but it looks like he should have quit while he was ahead. He has only one way to get out of the situation he now finds himself in: kidnap a woman named Francis Connor and deliver her to an agreed upon place. Only, Frannie has no clue that she's actually the victim of a kidnapping, thinking that this is nothing more than part of an elaborate plan concocted by well-meaning friends who think she needs more adventure in her overly sheltered life. Where Frannie never expected to be part of a real-life kidnapping plot, Luca sure as heck never prepared himself for a captive quite like Frannie and her dog, Mr. Bing. But then he never thought it possible to be quite so captivated with the one-of-a-kind woman Frannie was.

Zany is the best way to describe this book, and if my suspicions are correct, it could be the first in a new series (but maybe that's wishful thinking on my part). Whatever ideas you may have as to how the story is going to go should be set aside before diving into this book, because trust me, it's probably not going to go that way. Luca and Frannie were a hoot, the latter in particular, and I've always had a thing for furry babies that end up playing sidekicks and Mr. Bing was an adorable scene-stealer. With this trio out on the road trying to get to Mr. Death, aka the villain orchestrating the whole thing, high jinks galore are the order of the day, or well, for however long it takes them to get what ends up being an adventure done with. Be ready for laughs aplenty with Conheartists. It gets five stars. ♥