Review: A Taste Like Sin by Lana Sky (Painted Sin #2) 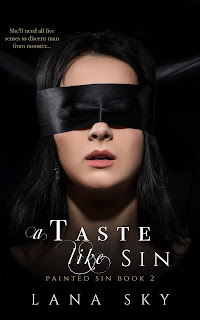 Can I just say that I'm glad Lana Sky didn't make her readers and fans wait for months for this sequel? After A Touch of Dark, I needed more of Juliana Thorne and Damien Villa, and A Taste Like Sin picks up where its predecessor left off. The bond that exists between Juliana and Damien grows deeper in ways that neither one of them fully anticipated. For all her years, Juliana has been the unwitting puppet in her own life, with others pulling the strings for purposes both well-meaning and otherwise. Her connection to Damian is one that offers protection, but will self-preservation lead her to finally take matters into her own hands and take control of her destiny? In the process, will Damien's secrets eventually be revealed and when all has been said and done, will the tenuous hold they have on what they're just beginning to create together crumble to the ground or be fortified by all the trials?

If there's one thing that I've learned after discovering Lana Sky and having read several of her books this year, it's that she's an author that keeps me on my toes. There were unexpected twists in this conclusion to her Painted Sin duet. Both the main characters are flawed, but that's what makes them far easier to empathize with because at the end of the day, they're just human. There are missteps along the way, and that was part of what made these two fascinating. The character and story development throughout the duet is top-notch, allowing for a more in-depth study of the cast led by Damian and Juliana and how they're shaped by their experiences as individuals and as a couple. A quick note: the books must be read in order (A Touch of Dark first, followed by A Taste Like Sin) because this duet carries a continuing story line and one pair of main characters throughout. This snags five stars! ♥

A Touch of Dark (book one) - five stars - My Review