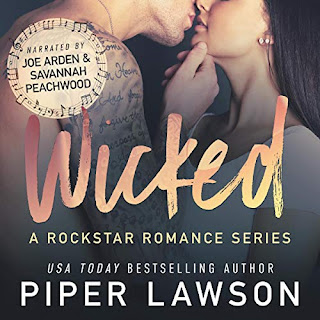 It's been about two years since I last read something from Piper Lawson--NSWF, the second book in her Play trilogy--so I welcomed the opportunity to not just re-acquaint myself with her writing but to listen to my very first audiobook from her, and it's a trilogy to boot! The Wicked audiobook consists of the first three stories in that series by the same name--Good Girl, Bad Girl, and Wicked Girl--and it's about one couple, a twenty-year-old college student and a twenty-eight-year-old rock star, whose lives become entangled in ways neither had ever planned for.

Good Girl is where we meet the cast of characters led by Haley Telfer and Jax Jamieson. She's a student who's co-op program requires her to find a job, and he's the lead singer of Riot Act and her celebrity crush. They end up working together when Haley is tasked to back up the sound engineer on Riot Act's latest tour. Haley and Jax clash, but there's an underlying attraction going on. Bad Girl picks up after Haley walks away from Jax once she learns the secret he's kept from her; Wicked Girl is two years after Jax decides Haley has chosen the man he hates over him.

In terms of the Haley and Jax's story as a whole, I did like the dynamic between them, especially once what they had transcended from Haley mooning over the fact that the man she's been crushing on for years is in such close proximity and may very well have a thing for her, too. One thing I didn't particularly like, however, was how it seemed Haley used sex to...entice Jax to do something. On the other hand, Jax had a bad habit of walking away when things didn't go his way rather than having a discussion and finding alternatives or coming to a compromise.

Story-wise, Good Girl gets 3.5 stars, Bad Girl gets three stars, and Wicked Girl gets four stars. Piper Lawson does an admirable job keeping Jax and Haley's romance going over the span of three books, although the middle--aka book two--section falters a bit. Haley's issues with her estranged father and Jax's own situation with parenthood were my favorite aspects of the story because they're more heartrending. Joe Arden and Savannah Peachwood perform well over the twelve and a half hours. With 4.5 stars for narration and 3.5 stars for the story, Wicked gets four stars. ♥