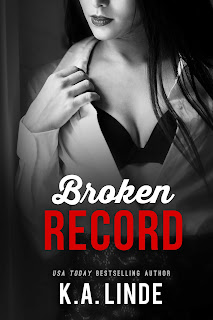 Broken Record is the fifth novel in K.A. Linde's Record series, a collection of books which features the three Maxwell siblings who belong to a political family from North Carolina. Books one to three--Off the Record, On the Record, and For the Record, all published by Montlake Romance--are about Brady and Liz Maxwell, and book four, Struck from the Record, which was independently published, is about Clay and Andrea Maxwell. Book five is about the youngest Maxwell, Savannah, and hers is a second-chance romance with her former best friend, Lucas Atwood.

Savannah Maxwell has graduated from college and has landed her dream job working for the Washington Post. She and her boyfriend of three years, Easton are making the move to DC and sharing an apartment together. Everything is fine and dandy in her world...and then Lucas Atwood comes walking back into it. Things have been strained between them for the past four years, and hoping they could simply go back to being friends is wishful thinking on her part. Everything changed four years ago and now, everything could change yet again for them both.

I knew going into this book that it was part of a series, and I did see snippets of it when K.A. Linde shared it with her newsletter subscribers as a serial. Now, I've enjoyed my past reads from Linde, which is why I decided to nix my policy of reading books in a series in order. Having read Broken Record, however, I'm reminded of why I have to darn policy in the first place. I know many authors like to say that books in a series can be read as standalones when it isn't about just one couple or has a continuing story line, but recurring characters makes me dispute that.

I felt somewhat lost while reading Savannah and Lucas's story. Never having read the first four books in the Record series, I have no clue if their background and history is within those pages in bits and pieces. I also didn't feel that much needed chemistry between Savannah and Lucas, nor did I feel it with Savannah and Easton. There was a lack of communication going on with both couples, and with Savannah being the common denominator, I spent a whole lot of time wishing she would speak up and be honest rather than pussyfoot and end up hurting both guys.

All that being said, K.A. Linde's writing has always clicked with me before, and the earlier books in this series were already on my to-be-read list because I'd heard good things about it. So maybe because I don't share the history and connection that other readers have with the series, it simply wasn't working as much as I would have hoped it would or expected it to. Savannah wasn't a favorite of mine. I was honestly glad Easton wasn't with her anymore because he deserved better, and I wondered why Lucas was so smitten with Savi. Three stars go to Broken Record. ♥