Review: The Rebel King by Kennedy Ryan (All the King's Men #2) 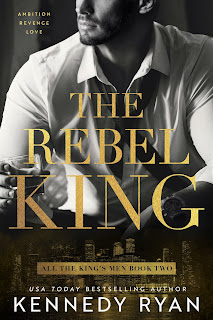 Award-winning and bestselling author Kennedy Ryan continues the epic romance of Lennix Moon Hunter and Maxim Kingsman Cade, which began with The Kingmaker released in late October, with The Rebel King, which also concludes her All the King's Men duet. Nix is a woman who has never settled, someone who was brought up to stand up for her beliefs and to fight for the greater good. As strong as her feelings for Maxim may have been, she was wary to trust both her emotions and the man who laid sole claim on her body and heart. They struggle to find equal footing in the world that they co-exist in, even as Nix struggles to hold on to her convictions and Maxim struggles to show her that what they have is worth both going to war for and sacrificing whatever necessary. But when an unseen enemy comes to demand vengeance, will the sacrifice required be far more than they expected?

I've been holding back on finalizing my review for this title till the very last minute because I wasn't sure if I would be able to properly explain my rating for it. Allow me first to reiterate my admiration for Kennedy Ryan and her writing. I've loved the books that I've read from her, and I look forward to familiarizing myself with the work that I've yet to read and to falling heart first with the stories that she has yet to share with readers. Even as I struggled with certain aspects of the All the King's Men duet, there was never a doubt in my mind about how gifted a storyteller Ryan was and is. She pens her romances not only with heart, but also with intelligence and the desire to go beyond the usual, and that's due in large part to my belief that she doesn't underestimate her readers and fans.

All that being said, what I had difficulty with in this book was the heroine. I admired Lennix for her tenacity, but in the same vein, there was something about her that felt off to me. I don't think she was disingenuous nor did I doubt her feelings for Maxim; however, she did come off as manipulative to a degree, doing whatever she believed was necessary for things to go a certain way, as if the end justified the means. She did what she did knowing full well how intent Maxim was on showing her just how much he loved her. So yeah, it was Nix who gave me pause. It wasn't the political tone of the story nor was it what happened to Maxim's brother. Inasmuch as I loved Maxim and the story as a whole, I also have to take into consideration the aspects of the book that didn't work as well for me. All things considered, The Rebel King was still a four-starred read, and All the King's Men a notable duet this 2019. ♥

Read my reviews for the All the King's Men series:

The Kingmaker (book one) - four stars - My Review

Purchase The Rebel King on Amazon.