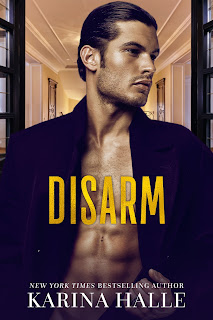 I may have been a tad wary going into this second novel in Karina Halle's Dumonts series given that I wasn't a fan of the series starter, Discretion. Fortunately, Disarm is what the series needed to bounce back in my eyes, with the story of Seraphine Dumont and Blaise Dumont. For those who aren't familiar with the series or with this two characters in particular, it may seem either curious or scandalous that they share the same last name. No, they aren't married, but they are cousins yet not by blood nor by marriage. A nine-year-old girl named Jamillah Bains was adopted by Ludovic and Eloise Dumont and she became their daughter and a younger sister to Renaud and Olivier, and later changing her name to Seraphine. Blaise, on the other hand, is the son of Gautier Dumont, Ludovic's brother. When Ludovic Dumont suddenly passes away, Seraphine isn't just devastated; she has her suspicions about her father's death. She's distrustful of her uncle and her cousins, Pascal and Blaise, but among all of them, Blaise may be the only Dumont left in Paris she'd even consider trusting. If only her traitorous heart wouldn't get in the way, but the knowledge of Blaise long-held feelings for her may be just enough to disarm her.

This proved to be an intriguing and entertaining read filled with deception and machinations within the Dumont dynasty. While the mystery as to what may have really happened to Ludovic and who was behind it was easy enough to figure out--I had one suspect and one suspect only--what really held my attention here were the respective back stories of twenty-six-year-old Seraphine and twenty-nine-year-old Blaise and how their romance developed throughout. These were two formidable and rich main characters, but there was a fair amount of wariness going on mixed in with the attraction, as is what can be expected when trust isn't a firm thing. Blaise is definitely my favorite Dumont (so far) and he was perfect for Seraphine. I enjoyed reading their story and now find myself intrigued as to how book three will play out, especially since it'll be Blaise's brother, Pascal's, story, and let's just say that Pascal isn't exactly swoon-worthy hero material...for now (fingers crossed). Disarm garners four stars. ♥