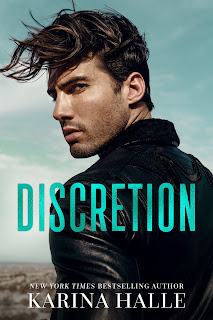 I've been excited to read Karina Halle's first book with Montlake Romance ever since it was announced. Discretion, which kicks off Halle's Dumonts duet, sounded like it had that romantic suspense feel to it that hearkened back to the some of the author's older releases, i.e. The Artists and Dirty Angels trilogies, but maybe with a far more swanky and sophisticated air to it compared to the grittier backdrop of the two aforementioned series. So, when the publisher allowed me the opportunity to peruse an advanced reader copy (ARC) of this new title, I considered it a major deal, especially since Halle has been a go-to author of in ever since I read her Experiment in Terror series.

Sadie Reynolds may be in one of the most glamorous locations on the planet, but this twenty-three-year-old American student who's been down on her luck has her luck changed in the most unexpected of ways after being rescued by a mysterious and gorgeous hotelier. Thirty-year-old Olivier Dumont has a reputation--he's considered the most eligible bachelor in France, is heir to his family's fashion empire, and has more money than Sadie could ever dream possible. It seems like he's got the world at his fingertips and offers to it up for Sadie. It's like a fairy tale unlike any other she could have ever conjured, but Olivier's secrets may cost her any sort of happily-ever-after.

My absolute favorite thing about this book was the suspense element to it, not that I was all that surprised since this is Karina Halle we're talking about and she's already proven just how good she is when it comes to that. Where the book falters, however, is with the actual romance aspect of it. I liked Sadie; I liked Olivier. Unfortunately, these two simply didn't click with me as a couple, making it near impossible for me to be emotionally invested in their romance, which is, well, a necessary thing for me as a reader. That pains me to even say since Halle is an author whose work I've enjoyed from the get-go. While it did fall short of my expectations, Discretion still gets three stars. ♥