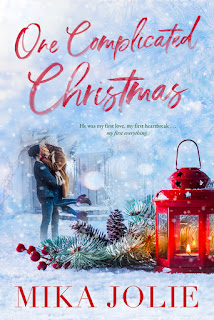 It's been several months since I last read something from Mika Jolie, but she's back with a story right in time for the holiday season and it's a second chance romance to boot! One Complicated Christmas is a novella and readers meet Alexandra Kovac as she makes her way from her home in New Jersey to Vermont. She's spending her very Christmas all by herself, what with her parents off on a well-deserved cruise. Sasha's also taking the opportunity finally let go of the last ties she had to the last relationship she had that broke her heart. Burning letters she wrote to her ex who left her with nary an explanation is her way of moving on, but Fate had other plans. You see, the B&B she's staying at is co-owned by Joseph Parker--the same Joe who ghosted her their senior year six years ago.

This may sound weird to some, but when it comes to second chance romances, I need a fair amount of groveling. At the very least, I want there to be remorse and regret and some actual desire to make amends. Quick reconciliations and a lack of discussion as to what happened before don't do it for me. Naturally, I was a very happy camper with the way Mika Jolie wrote Sasha and Joe's story because there wasn't this immediate jump to starting anything up romance-wise. It may seem quick to some because it was only a handful of days, but you'll see why I think it all played out satisfactorily when you read the book. I was prepared to not like Joe, but while he could have handled the events that happened in a better manner six years ago, the guy had a good heart and was caught in a situation that left him in a daze. Sasha, on the other hand, was easily likable, and I empathized with her. I also liked that the book was about family, and speaking of family, I'm really hoping that Joe's sister, Emily, gets her happily-ever-after as well. Maybe Santa can give Jolie a nudge to make it happen. 4.5 stars for One Complicated Christmas. ♥

Purchase One Complicated Christmas on Amazon.