Review: Something Just Like This by Jennifer Probst (Stay #3.5) 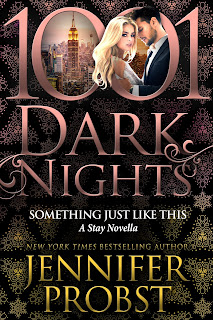 Jennifer Probst continues her popular Stay series with a novella published through the 1001 Dark Nights collection. Something Just Like This is the story of Jonathan Lake, mayor of New York City, and Alyssa Block, his assistant, so it's an office romance slash political romance. It's been five years since Jonathan lost his beloved wife, leaving him a single father to their daughter, Chloe. In all that time, he's kept himself busy with other endeavors, and it's his current term as mayor that has him at his busiest. Thankfully, everything is running smoothly, thanks to his more than capable assistant of two years, Alyssa. She's organized, intelligent, and beautiful, and one of the few people he unequivocally trusts. When Jonathan is handpicked to run for governor, agreeing to do it is nearly a no-brainer and he knows he'll need Alyssa by his side more than ever. However, Jonathan's feelings for her have been veering towards something not-so-professional nor platonic for some time, and it looks like Alyssa may well reciprocate. The question is: Could a romantic relationship with Alyssa put Jonathan's future gubernatorial campaign at risk?

I quite liked this novella, and it's a firm reminder of why I fell in love with Jennifer Probst's writing in the first place years ago. Fast-paced but not rushed, this was a sweet and sexy story about Jonathan who found himself with the opportunity of a lifetime in his political career while also discovering that his feelings for Alyssa were unlike anything he's experienced since his wife passed away. The dilemma these two were forced to confront was a very real one, especially given the current climate when it comes to anything other than professional within the workplace. I adored Alyssa and how she was confident and steadfast and recognized how smart she was, yet didn't think it would even be possible for Jonathan--a man she had been crushing on--to see her as "more". Naturally, that was how she thought things were, but Jonathan was such a sweet guy, and I loved how he didn't just have admiration for her, but affection as well, and that was even before anything romantic happened between them. Something Just Like This easily gets five stars, and I cannot wait for Chloe's story, which is due for release in 2020. ♥