Review: After the Crash by Emma Alcott (Small Town Hearts #1) 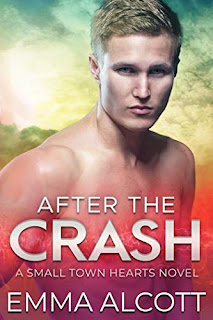 Better known by her pen name of Piper Scott, which is associated with the M/M omegaverse sub-genre, Emma Alcott is the alternate pseudonym used by the author for her M/M contemporary romance work. Her new series, Small Town Hearts, gets off to a very strong beginning courtesy of a sweet out for you (OFY) story about an recently discharged member of the Air Force suffering from PTSD and a multi-millionaire founder and owner of a tech company taking a year-long break from work. Marshall Lloyd and Frederick "Fox" Fraser were never friends but they knew each other--Marshall was the geeky guy that was bullied and Fox was the far more popular one. When they were seniors in high school, Fox finally decided to step in after having to bear witness to yet another round of Marshall being bullied. A decade later and Marshall's and Fox's lives intersect once again, this time with Marshall coming to Fox's rescue by offering him work as a groundskeeper in his newly renovated home in their hometown of Bulrush, Illinois. Sure, Marshall may have had a crush on Fox years ago, but there's no way that a straight guy like Fox could ever fall for a gay guy like Marshall, not even if he wished upon every single star. Right?

I seriously loved this series starter! There was angst and humor and all the good stuff in between and it had two main characters who seemed like such opposites but both had dark periods in their lives and served as each other's hero of sorts just when they need it most. There are heavy topics tackled in the story--from bullying and post-traumatic stress disorder to physical abuse of a minor by their parent--and the author doesn't shy away from them, although the instances in which they occur or are talked about aren't overly graphic. However, I know that these can triggers for certain readers, so just a quick heads-up in case you're looking into reading this title. All that being said, Emma Alcott has taken all the elements and created the sort of story that has you wanting to simply lean back and enjoy the heck out of it. I loved both Marshall and Fox, and there wasn't a whole lot of unnecessary regarding Fox's realization of his feelings for Marshall even though had never been attracted to another man in the past. I also want to make mention of a more than noteworthy peripheral character in Sam Acton, whose own HEA gets told in a free bonus short entitled After the Match. The only hiccup in the book would be how Fox's parents and Marshall's mother are barely mentioned after a cursory appearance and communication via text messages. Otherwise, After the Crash was a 4.5-starred introduction to Alcott's writing and her new Small Town Hearts series. ♥

Purchase After the Crash on Amazon.