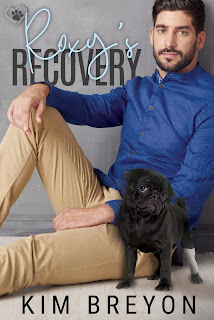 When thirty-five-year-old veterinarian Vaughn Winters finds a homeless man on the side of the road during a rainstorm, he immediately offers his help when he realizes the man's dog, Roxy, is injured. Unable to pay for Roxy's treatment, Vaughn offers her owner, thirty-year-old Alex Sorreno, the opportunity to work off what he owes and to have a place for Alex and the pug to stay. His newest employee has clearly walked away from dire circumstances, and Vaughn finds himself wanting to get to know Alex on a more personal level. Will six weeks and a kind-hearted vet with a sweet Labrador named Noel be enough for Alex to see that he and Roxy have found love and a home?

Kim Breyon's Roxy's Recovery wasn't necessarily a lengthy read, but it felt longer than it actually was. It was a slow-burn romance that dragged in quite a number of spots, which made the temptation to skim a struggle that was real. I wasn't a huge fan of Alex's, who read much younger than his three decades. I understand how his past has made him wary and maybe even eager to establish his independence, but there were times that he came off as glaringly ungrateful to Vaughn. Sure, it would have been silly for Alex to be overly trusting of Vaughn straightaway, but the same could have been said of Vaughn towards Alex, and I just couldn't shake my own wariness when it came to how Alex was. However, I did like Vaughn more than I did Alex, thanks to his being a generally caring guy.

With this being an advanced reader copy, I won't get too much into what I hope was fixed after proofreading and editing. However, I do feel that there were sections of the story that weren't all that necessary, feeling more like filler rather than something substantive that would have made the development of both the story and the characters better. The fact that this wasn't a long book yet felt like a long read highlights my aforementioned insights. I also think it would have been nice to have dual perspectives, especially since Alex's past is pivotal to who he is when Vaughn meets him. At the end of the day, it wasn't just Roxy who was recovering from her injuries but Alex as well from his emotional turmoil, and I appreciated the author's efforts to show that love can ultimately heal if we allow ourselves the opportunity to embrace it and allow it to truly flourish. Three stars for Roxy's Recovery. ♥