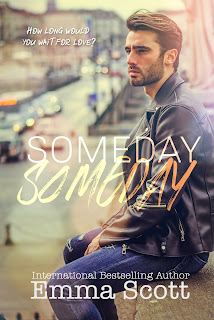 Note: An advanced reader copy (ARC) was provided by the author via NetGalley.

“Hiding? Are you trying to get a confession out of me? Admit that I'm...what? Like you?” He chuckled into his drink. “I'm nothing like you.”

Heat climbed up my face, anger and embarrassment, both.

“That's a compliment, by the way. Obviously.” He downed the last dregs of his liquor and set the glass on the table. “I wish I were like you. You're not a sellout. A fraud. You're real...made of flesh and bone.” He barked a hateful laugh. “You're a real boy, Maximilian. Not a puppet. Someday, I hope to be a real boy, too. Someday...”

There are stories that go beyond genres and tropes--the rarefied few that have a tale to tell, one that needs to be experienced by readers far and wide. Emma Scott's Someday, Someday is one of those select few. Composing a review for this title has not been easy, but that's par for the course when it comes to novels that make my heart feel as if its been put through the wringer and have thoughts and notions swirling in my head while also turning out to be a soothing balm to my soul. I've loved every single each of the Scott-penned novels that I've had the good fortune of reading, but this newest one felt more like a privilege--an honor--to read and it is the author at her best.

Someday, Someday is the story of two men from two seemingly different worlds yet have far more similarities than differences. Nine years ago, Maximilian Kaufman was a sixteen-year-old who was forced out of his home in Seattle by his father after being caught kissing another boy. Seven years ago, Silas Marsh was a seventeen-year-old who was forcibly sent conversion therapy in Alaska by his father after learning of his younger son's "indiscretions" at boarding school. They've lived through their personal hells, but each bears the scars. When their lives unexpectedly intersect, the first encounter leaves them ensnared, but the second one has them entangled in ways that have them wishing for the possibility of more someday. But how long does one wait for love and acceptance?

I make no secret of the fact that I love to read a variety of genres and that among those genres, romance is one of my top three. Now, another known fact about my reading habits is that I've had a thing for M/M romances in particular since I first discovered it in 2013. I've read more than my fair share of M/M romances over the years, so I confess that I'm a wee bit more particular when it comes to this sub-genre. I've come across authors who are more known for the M/F romances and then try their hand at LGBTQIA+ romance and their writing just doesn't translate as well with the switch. And then there are authors like Emma Scott, who went outside her wheelhouse with Max and Silas's story and proven what a gifted storyteller she is, regardless of the romance sub-genre that she's chosen. Yes, this is an M/M romance but she also touched upon the complexities of being gay and not being fully accepted.

Over the past three months, a day hasn't gone by where I haven't cried due to a major loss in my life, and it had nothing to do with any of the books I'd read. So, of course, here I have Emma Scott's newest book, and it's only the second I've shed tears over during the same span of time. My heart broke time and again for Max and Silas, not just for what they endured as teens because those that they thought would accept them first chose not to, but also for the struggles they continued to face as adults AND how they were able to triumph over them because they'd found a partner and allies who not only loved them but embraced who they were wholeheartedly. Scott has written a beautifully moving story about true love, family, and perseverance as well as bravely delving into need-to-be-discussed topics like addiction, conversion therapy, and autism with research and sensitivity. Someday, Someday is a modern-day masterpiece, an absolute must-read, and one of my all-time best reads. Five-plus stars. ♥