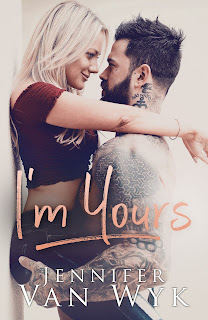 I'm Yours is my fifth read from Jennifer Van Wyk, but it's the fourth one this year alone, and I've enjoyed reacquainting myself with her storytelling. This newest release is a standalone and it's a second-chance romance with mystery suspense overtones. We're introduced to Reed Sanders and Sadie Jones when they're eighteen, two best friends contemplating what lies ahead now that they've graduated from high school. They shared a bond that had started when they were only fourteen, but all it takes is two confessions on one life-changing night for that bond to break and Reed to leave Lakeside, Montana behind. Twelve years later, Reed returns to his hometown. The widowed father to a five-year-old daughter named Emerson--his Emmy, the light of his life--Reed knows this is what they need to start over after losing his wife, Katherine. What he doesn't know is that Sadie still lives in town, and now, she also happens to be Emmy's new dance teacher. So much has happened over the past twelve years, and while some things have changed, others haven't--and that includes Reed's feelings for his former best friend...and Sadie's feelings for the boy that she lied to the night when everything changed between them forever.

This was such a great story about love and how life can move forward after rejection and loss and how you can't change the past but how second chances can give you the opportunity for a whole new future. For the first few chapters, I was hesitant to like Sadie. I knew why she did what she did, but I'm not a huge fan of people who make choices for those who are most important to them, believing that doing so will be better for the other person. However, Sadie did win me over, thanks to how she handled things once she and Reed had found their footing with each other after he'd moved back and discovered she was still living in Lakeside. As far as Reed is concerned, well, suffice it to say that there was no need for him to win me over because the guy had snagged my heart from the prologue all the way to the last page of the epilogue. Le sigh. He was a great father, son, and friend, and he truly was devoted to not just Sadie and Emmy, but also to Katherine, his late wife. Could the guy be any better than he already was?! The suspense elements of the story were pretty strong, and bonus points to the author for keeping me guessing till the revelation. My one hangup? The use of "widow" to describe Reed and not "widower". Yeah, it may seem petty to some, but sorry, I do notice stuff like this. Overall, I'm Yours was a remarkable five-starred read. ♥

Purchase I'm Yours on Amazon.