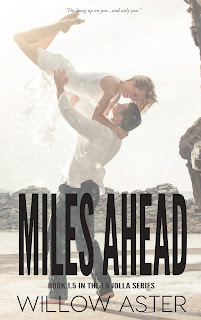 Miles Ahead is a novella in Willow Aster's La Jolla series and it's the awaited story of Miles Stark. Fair warning: I may mention things in this review of mine that could prove to be spoilers for those of you who have yet to read the first book in the La Jolla series. If you're familiar with the author's 3,551 Miles novel, you'll remember Miles as the guy who was smitten with Mirabelle Hart from the moment he met her when they were in high school and when their paths crossed again a few years later. You'll also recall that the poor guy got his heart broken twice, with Mira's heart already belonging to Jaxson Marshall long before she and Miles had ever met. And now, Miles get his much-deserved happily-ever-after, but I don't think the guy ever expected to fall in love with a very famous actress.

When Miles Stark meets a potential buyer for a mansion by the beach, he's immediately struck by Cort Sellers's beauty and her need for privacy within her new home. He has no clue that the woman is actually Cortlyn Whitaker, an award-winning and in-demand actress who has decided to retire from acting. Miles decides to nip his attraction in the bud, thinking that falling for someone like Cort will only lead to heartbreak. But when he learns about what Cort is currently facing, Miles knows that the only place he needs to be is by Cort's side caring for and supporting her. Life is about to become far more complicated for her; will he be able to withstand everything fame their way?

This was a short but sweet read and everything progressed really quickly. Miles was a standout supporting character in 5,331 Miles and I always felt that he needed someone who saw him as the stand-up guy that he was and not just as a stand-in. Thank goodness he found that in Cort, a woman who was both courageous and vulnerable. Cort's story is obviously inspired by the #MeToo movement, particularly the Harvey Weinstein case, and while what happened to her wasn't detailed, the aftereffects of what she went through were heartrending. I enjoyed reading Miles and Cort's romance, though there were times where the text was repetitive and the pacing was also a bit rushed. I'm giving Miles Ahead four stars, and this novella may be read independently of 5,331 Miles. ♥

Read my reviews for the La Jolla series:

Miles Ahead (novella) - four stars - My Review (posted above)

Purchase Miles Ahead on Amazon.