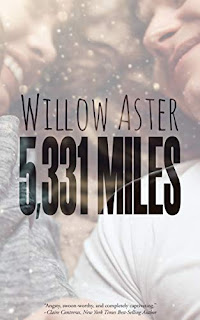 Originally shared with her readers as a serial in her newsletter, Willow Aster has released 5,331 Miles as a full-length novel, and it harks back to my first two reads from her six years ago--True Love Story and In the Fields. I'm not saying they share the same story lines, but I got the same sort of feels, and when I get those feels, I know the book I'm reading is special. This was a friends-to-lovers slash second-chance romance read about Mirabelle Hart and Jaxson Marshall. With their mothers being best friends, becoming the closest of friends growing up almost felt like a given for Mira and Jaxson. She was his Bells, the girl he shared dreams with and made promises to, even going so far as creating a list of everything they would do together once they were all grown up. But when Jaxson and his mother went across the pond from Holmes Chapel, England to the proverbial sunny side of the street in California, USA, things began to change. When Mira and her mother moved, too, Mira knew that the Jaxson she adored was different from the Jax everyone else wanted to be with. With careless words and confusing actions, Mira and Jaxson grew apart. College made avoiding him easy, but now he's back and he wants one more chance...

I loved reading all about Mira and Jaxson! The story is mostly told in the present, with Mira being twenty and Jaxson twenty-two, but there are enough flashbacks that allow readers to see how their relationship was as children and how it shifted and changed over the years. This wasn't a case of just one of them messing up, even though pointing the finger at Jaxson in the whole blame game thing would be easy. Neither one was what I'd consider intentionally cruel, which is something you find repeatedly in second-chance love stories where one character does something to make sure the other breaks things off or walks away from them. When it came to Mira and Jaxson, there are disagreements and misunderstandings plus a general lack of open and honest communication as well as some assumptions being made. Remember, these two were friends as children and pre-teens, and when then they were teenagers and then in their very early twenties, so missteps abound. I must say that Jaxson as a twenty-two-year-old deserves kudos for how he went above and beyond to win his Bells's love and friendship back. 5,331 Miles was a really great read and gets 4.5 stars and has me all excited to read Miles Ahead. ♥