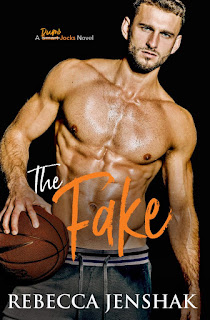 I've been so looking forward to reading Nathan Payne's story since I finished The Tip-Off, but at the same time, I knew this was going to be bittersweet because The Fake was going to be fourth and final book in the Smart Jocks series. The series starter, The Assist, was my introduction to Rebecca Jenshak's writing, and by the time I'd read The Fadeaway, I was officially hooked to both her storytelling and this series. And now, here we are, at the end of what's been a fantastic quartet of stories about four close friends who belonged to the same college basketball team, each one having found love and purpose. While I'm sad the series is ending, can I just say that it couldn't have ended on a better note than having Nathan's--and Chloe's!--story to close this out? Absolute awesomeness!

Nathan Payne and Chloe Macpherson are both twenty-one-year-old student athletes in their senior year at Valley U, and they're both struggling to find their footing. Nathan can't afford to make another mistake, already being warned it could mean him getting kicked off the team and losing his scholarship. On the other hand, Chloe just transferred and she isn't exactly being made to feel welcome by her new volleyball teammates. When their paths cross, however, they find a kinship that feels like that sliver of light and hope in all the bleakness surrounding them. Entering into a fake relationship is a win-win for both of them, but will they lose their hearts when it all feels real?

My heart went out to both Nathan and Chloe as their back stories and current situations came to light. They were good people who were in the middle of trying times and became each other's buoy in circumstances that could have easily drowned them. These two started out as true blue strangers who would become friends that pretended to be in a committed relationship until real feelings got in the way. I loved seeing them evolve and mature, becoming better and more self-assured versions of themselves. Yes, they still made mistakes, but they owned those mistakes and learned from them. An added bonus to this book was having the three couples from the previous books around and seeing where they were all at in their own relationships. The Fake may be the last book in the Smart Jocks series, but I'll hold out hope for more from this book universe. This series ender gets five stars. ♥

The Fake (book four) - five stars - My Review (posted above)

Purchase The Fake on Amazon.