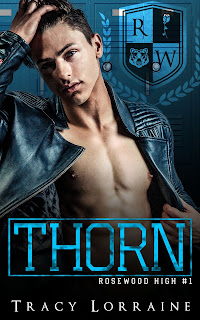 Thorn is the first novel in the Rosewood High series from new-to-me author Tracy Lorraine. It's the story of an eighteen-year-old British girl who leaves what's left of her life as she knew it behind in London and an eighteen-year-old American boy who intends to make the new life she's just starting a living nightmare. The death of her parents have Amalie Windsor-Marsh moving from England to the United States to live with her maternal grandmother. Being in America forces her to become a junior in high school instead of already starting university had she still been in London. All she wants now is to keep her head down and get the school year over and done with, but she attracts the attention of the one group that sits atop the social hierarchy of Rosewood High. They consider themselves royalty and their king is Jacob Thorn, captain of the football team and a guy who has set his sights on making Amalie wish she were back from wherever she came from. Jake doesn't hide his absolute dislike for Amalie; she's now the girl he loves to hate. Taunting her is the only reason he can't stay away from her. Right?

It took a bit for me to fully get into Amalie and Jake's story, and a lot of that had to do with his hating her on sight and not really having a firm justification for it till later. His motivation for treating her as terribly as he did seemed to be on wobbly footing, but the more I got to know the Jake behind the facade, the lesser my distaste was towards him. On the other hand, I quite liked Amalie, who had a spine made of stronger stuff than her bullies thought. I liked seeing how these two progressed from strangers and then adversaries brimming with hostility to teenagers who were dealt with more than people their age should have to and yet find a kindred spirit in each other. Aside from Amalie and Jake, the supporting cast of characters were noteworthy, and I'm extending that assessment to the antagonists as well. As a series starter, this book did well because the story it told held my interest and has me curious enough to continue the series, especially with that ending setting things up for the next couple to be featured. Thorn may have been my first Tracy Lorraine read, but it shall not be my last. Four stars. ♥