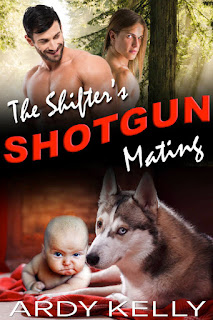 Note: A review copy was provided by the author via Other Worlds Ink.

The Shifter's Shotgun Mating is the second book in the Lone Wolves Ranch series from Ardy Kelly, and if the series starter, The Cub Club, was enticing, this new story has me thoroughly enthused. When I read Kelly's debut around the same time last year, I knew two things: I loved her writing and the story she had to tell AND I needed more from this world she created of shifters who lived on what was known as Lone Wolves Ranch. So naturally, I was a very happy puppy when I saw that there was, indeed, a second book and I've got my fingers crossed that we'll be getting even more because I may be a wee bit obsessed with these lone wolves who have you to find their destined mates. Now, book two is about an alpha named Adam, and his brother is Mack, the pack leader of the Lone Wolves Ranch whose story was told in book one, which you don't necessarily need to read, but do it anyway.

When Adam and his team of bounty hunters follow their prey on another pack's land, he didn't think asking for permission would mean having to fork over ten percent of their reward to Pine Hollow. As their prey makes his escape, Adam is forced into a shotgun mating with a recently widowed omega named Ricky with the understanding that the mating would be dissolved once Adam forks up Pine Hollow's share of the reward. All he needs to do is to keep his distance from Ricky so as not to give in to what he believes is the witchy ways of his omega. But there's something about the naivete and innocence of Ricky that adds to his appeal, and it looks like Adam isn't the only one drawn to him. All Ricky wants to do is to be fully free of Pine Hollow, and in order to have that happen, he'll need an alpha that actually wants him, but who can even get close enough with Adam on guard?

Ah, I loved reading about Ricky and Adam! Yes, Adam was as stubborn as I expected him to be, and I was sorely tempted to bop him on the nose more than once (and not in the loving tap-tap way I do with my dogs and cats either). However, there's a learning curve to everything and since this was the first time he'd ever been mated to anyone, I got that he needed some time to adjust. Ricky, on the other hand, was such a joy, especially with how he was looking at this strange world beyond the limits of Pine Hollow with fresh and curious eyes. The Shifter's Shotgun Mating was pretty much a slow burn romance (with an mpreg shifter feel), and with some lighthearted humor and a pinch of angst--and yes, there was heat, pun intended!--made for such a fun and entertaining read. I adore this cast of characters that make up the Lone Wolves, I'm so going to be needing more, Ardy Kelly! 4.5 stars! ♥

Read my reviews for the Lone Wolves Ranch series: