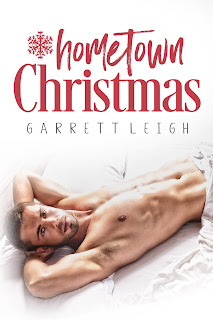 We're still a month and some change away from Christmas, but it's never too early for a holiday romance, so Garrett Leigh's Hometown Christmas comes at a good time on my reading schedule. This is pretty much a standalone, although if you're a fan of this author's writing, then you may recognize the main characters from Between Ghosts and the Rented Heart and Urban Soul series. There are also some familiar "faces" from those aforementioned titles that pop up here, which I'd like to think of as stocking stuffers. Yeah, yeah, I may be overdoing the whole Christmas thin, but I love this holiday!
Yani Nicolaou made the move from London to Leeds in hopes of getting a fresh start and away from the remnants of a relationship that ended badly. His main focus now is his food stall, and while it's hard work, he relishes proving his naysayers wrong. The only personal relationship the twenty-eight-year-old has in the area is with his best friend--the same best friend he begrudgingly says yes to when she asks him to help cook at the shelter she volunteers at. It's there that he meets thirty-eight-year-old shelter manager Gavin Richie, who left the military after getting injured while deployed. Neither is looking for a relationship, but time together and the holiday season may bring in tidings of love.
This book had all the usual makings of a Garrett Leigh page-turner, and I enjoyed every page turned indeed. Yani and Gavin were two men who had pretty much decided that love wasn't something they were actively seeking, but as is often the case, you stumble upon it when you least expect it. The angst wasn't overly heavy, which I thought was fitting since it is a holiday romance, and this was lighthearted compared to Leigh's other books. Sweet, sexy and full of holiday romance feels, Hometown Christmas gets four stars.