Review: All Wrapped Up for the Holidays by Various Authors 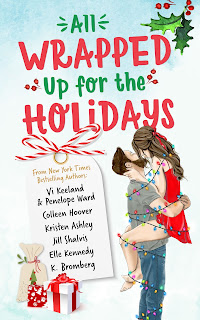 Gah! When I got the email about this surprise release from not just one but SEVEN bestselling authors, I may have squeed rather loudly in excitement. The authors in question are the writing duo of Vi Keeland and Penelope Ward, Colleen Hoover, Kristen Ashley, Jill Shalvis, Elle Kennedy, and K. Bromberg. I've read at least ONE book from each of these powerhouse authors, so I knew just how well these women could write. I couldn't wait to get my hands on the book, and the fact that it happens to be free (yep, you read that right--FREE!) was an absolute bonus. This holiday anthology may be titled All Wrapped Up for the Holidays but I'm sure I wasn't the only eager to unwrap it!

Vi Keeland and Penelope Ward kick the collection off with The Merry Mistake, which has an enemies-to-lovers feel to it. Piper is starting her life over--shedding herself of excesses, following her dream, and paying it forward. When she mistakenly assumes the man sitting outside her building is homeless, the man named Mason isn't shy about putting her in her place. Of course, neither of them expected their paths to cross yet again, but Fate moves in mysterious ways, especially during the holidays. This had a bit of hilarity to it and a hint of heat, but it was Piper with her neighbor, Mr. Hanks, that made it all about heart and enticed a smile on my face. I'm giving this 4.5 stars.

Colleen Hoover's Finding Perfect was definitely my favorite story, with familiar characters and a resolution that I found more than fitting to the story of Daniel Wesley and Six Jacobs of Finding Cinderella. Daniel may be a goof with a penchant of coming up with inappropriate nicknames for those closest to him, but he also happens to be hopelessly in love with his girlfriend--his Cinderella--Six. However, Six has looked rather sad as of late, and Daniel wants nothing more than to help heal the heartache inside of her, and he'll do anything necessary. This story shares ties with All Your Perfects, which I've yet to read, but it didn't matter because I still loved it. Five-plus stars!

Kristen Ashley takes readers to her Rock Chick world with A Rock Chick Christmas, specifically featuring Lucas and Ava Stark, whose love story played out in Rock Chick Revenge, book number in the Rock Chick series. Luke and Ava make marriage look easy, but come the holidays and Ava's stress levels rocket to soaring heights. Luke's world is all about Ava and their two daughters, but will Ava's holiday woes take their toll on Luke as well? I love it whenever I get to dive back into fun-filled universe that this author has created, and Luke and Ava were such a hoot! We get to see the Hot Bunch as well as a number of the Rock Chicks and familiar characters, making this a fun read. 4.5 stars.

Jill Shalvis returns to her Heartbreaker Bay series with Just Say When. James and Julia share a strong connection, and their nights together strengthen their bond. So why is it that Julia always seems so eager to leave James's bed once day breaks? In the past, James would never have encouraged a woman he was with to stay, but Julia is different--his feelings for her are stronger and he wants far more from her. The question: does she want the same thing as him? This was a story that highlighted the need for communication alongside all the love. These two had such strong feelings for each other, but had to work on their own doubts and insecurities. This story gets four stars.

Elle Kennedy gives us the continuation of the happily-ever-after that John Logan and Grace Ivers got in The Mistake, the second novel in the Off-Campus series. The Pact takes place a couple of years after The Mistake, and while Logan and Grace are still very much in love and committed to each other, Logan's commitments to his hockey team and Grace's to finishing her degree while making the most of their time together. Maybe some R&R at a B&B will help...or could leave them calling for help when a blizzard hits. This story is another one of my favorites, with lots of heat to keep you warm during this cooler holiday season. It gets five stars and can be read as a standalone.

K. Bromberg rounds out the anthology with The Package, an office romance with one of my favorite meet-cutes: getting stuck in the elevator. Julia Jilliland isn't having the best of days, so when she ends up in an elevator with a hot guy that rightly assumes works on one of the top floors, she takes out her ire on him. What she doesn't know is that the hot guy is none other than Archer McMasters, and it looks like Jules's delivered the wrong package to him. This was an interesting read with the whole twist regarding who Archer is and poor Jules having no idea who he is. With this last story getting four stars, and averaging the ratings, All Wrapped Up for the Holidays garners 4.5 stars. ♥

Download All Wrapped Up for the Holidays for free on BookFunnel.