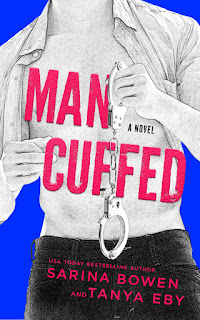 “Sorry,” she says, breathless. The car door slams. “I'm ready now.”I turn to glance at her, and it's a mistake. In place of short shorts, Meg is wearing big shades, red lipstick, and a yellow dress that shows just as much of her smooth legs, if not more. She's like a leggy goddamn flower that I really want to pluck.


I've waited for over a year for this fourth Man Hands novel! Like fifteen months, people! But man, oh man (hands), did Sarina Bowen and Tanya Eby make the wait worthwhile. This series just keeps getting better, but with the third book, Boy Toy, being my favorite, this latest release had huge footsteps to follow. Thankfully, Man Cuffed lived up to the challenge with this tale about Trouble and Copper. That brings to mind an animated movie about cute animals, but I digress. "Trouble" is a thirty-year-old aspiring actress slash serving wench named Megan Matthews, and "Copper" is a thirty-five-year-old police officer slash amateur baking master named Macklin Maguire. She mistakes him for a stripper in a cop costume (there's a compliment in there somewhere, I'm sure), then does a bit of breaking and entering in his apartment (yep, his new neighbor turns out to be the woman he can't stop thinking about). Now, Meg's playing the part of Mac's girlfriend for his sister's wedding. This is a role Meg can sink her... teeth into. It helps that they've got the hots for each other. Nothing about this is real, but trying telling them that.

If Liam McAllister from Boy Toy is my favorite main male character in the Man Hands series, then Meg Matthews has just become my new favorite main female character! I adored the spunk that Meg had all throughout. Sure, her acting career may be floundering at best for most of the book, but she refused to feel like a failure, refocusing her energy on other stuff (which you'll find out about once you read the book!). She was her own person and a work in progress, but she always focused on the positive, and that, more than anything else, is what I loved most about her. Now, Mac was a guy who had his issues when it came to relationships, and yes, he was justified in feeling the way he did considering his history (again, go read the book, people!). These two tried to resist their mutual attraction, and I feel that this also allowed them to forge a friendship with each other. Having said that, Meg and Mac--or as I've dubbed them, M&M--brought on the heat alongside the romance and humor and even a bit of angst. Sarina Bowen and Tanya Eby did NOT disappoint (and I need more!)! Man Cuffed snags five-plus stars. ♥