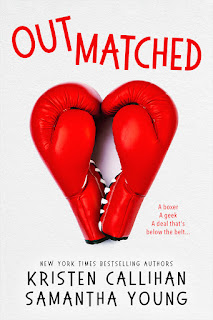 I couldn't love Parker. I could enjoy my time with her. But love? No. Because one day, I might be like Marcy, sitting alone at my kitchen table, wishing Parker was with me with all my heart and...


Two of my favorite authors have joined forces to write a romantic comedy that tickles my fancy. Outmatched is the story of a geeky girl and a retired boxer who strike a deal that's supposed to be a win-win for both of them but end up losing...their hearts to each other. Parker Brown's joy over getting her dream job is cut short when she realizes that the only way for her to move up is to appear "settled", as is the preference of her boss. What's a single woman like her to do? Why, go ahead and hire someone to play her boyfriend, naturally. She's found a guy who's quite suitable, thank you very much, but nothing could ever be that simple. Instead of getting the fellow intellectual she'd expected, she gets a surly former boxer turned gym owner named Rhys Morgan who could give sailors a run for their money with all his cursing. To make matters worse, her boss shows up at the same time and he's rather starstruck by Rhys. Seeing an opportunity staring him right in the face, he steps into the role of Parker's boyfriend while charming her boss, enough so the man will sponsor Rhys's struggling gym. Everyone wins. Right?

When authors decide to write a book together, regardless of whether they've proven to be bestselling writers or not, there's never a guarantee that it's going to click the same way their solo efforts have. Maybe that's pessimistic of me, but experience has taught me this, so naturally, with my excitement over Kristen Callihan and Samantha Young penning a rom-com comes a bit of trepidation. Fortunately Callihan and Young surpassed any and all expectations, coming up with an honest-to-goodness hilarious and heartfelt story about opposites who find common ground and, of course, love and how what starts out as fake becomes very real. The whole enemies-to-lovers vibe was present, so that delicious tension thrummed between Rhys and Parker, making the anticipation palpable. There's an ease in reading this novel, and even with my familiarity with the writing of both Callihan and Young, I couldn't distinguish who wrote what, which is yet another reason why this was such a standout read, as well as one of the standouts in a crowded field of new releases this week. I'm awarding Outmatched five-plus stars. ♥