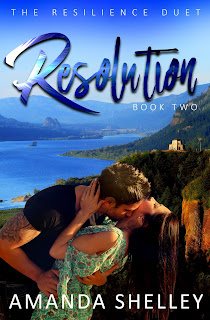 Resolution is the conclusion to the Resilience duet penned by debut author Amanda Shelley. Just a quick note: You need to read Resilience prior to reading Resolution because there is a continuing story line about one couple. If you haven't read the first book, I may end up mentioning something here that could prove to be spoiler-like, so consider yourself forewarned! Book two picks up where book one left off, and Enzo Harper's impending return to Germany finds him still trying to fully come to terms with the fact that he went and fell in love in a matter of weeks. Samantha O'Reilly is a single mother with a lot on her plate as is, so having someone like Enzo come along and dismantle her defenses was never part of her plan. Neither Enzo nor Sam were looking for love, but now that they've found it, will they be able to resolve the complexities of their situation and make a go of a future together?

This was a pretty quick read, and like the first one before it, didn't have a whole lot of drama to it. Now, I may be a self-confessed angst addict, but I don't necessarily require angst in every single book I read. With that being said, I may have wanted more than what was offered, especially since the first book was already drama-free. That doesn't mean that I didn't appreciate the story or Amanda Shelley's writing. I did, and I've actually got her next release on my radar. I just would have wanted a bit more complexity to Enzo and Sam's story, something to give it some additional oomph. Still, there's no denying that I'm a sucker for a well-written romance that finds its main characters with an ending that rewards them with love and happiness. Resolution gets three stars out of five stars. ♥

Read my reviews for the Resilience series: