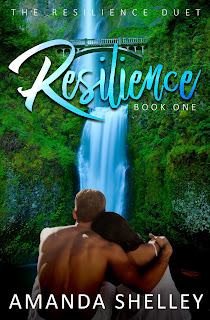 Resilience is the debut release from Amanda Shelley, and it also happens to be the first in her duet by the same name. This is the story of a thirty-eight-year-old single mother and a thirty-seven-year-old certified bachelor who form an unlikely connection but time is against them. Samantha O'Reilly marriage may have come to an end, but she isn't wasting time bemoaning the divorce; instead, Sam is focusing her energies on her three children--Declan, Maddie, and Frankie--her work as a commissioning editor, and the kitchen makeover in her home. When her contractor's son appears to surprise his dad while on leave, Sam doesn't expect to have the chemistry that she has with Enzo Harper. The air force pilot has chosen to live a life putting his sole focus on his career, but he's getting to the point where he needs to make certain choices, all of which will impact his future in one way or another. He's only in town for six weeks; and as soon as Sam and Enzo meet, those weeks change everything for both of them.

This was a drama-free read, one with the sole complication of the limited amount that Enzo has stateside before he has to return to Germany where he's stationed. Everything that happens between Sam and Enzo happens at a quick and steady clip, and from the get-go, the two share a connection that gives them pause because neither one had planned for it, not with where they were in their respective lives. There's nothing negative I can really say in terms of both main characters or even about their story. My one quibble would have to be that it just lacks a bit of oomph to take it to the next level. Still, I enjoyed Resilience, which gets four stars, and look forward to Resolution. ♥