Review: The Art of Holding On by Beth Ann Burgoon 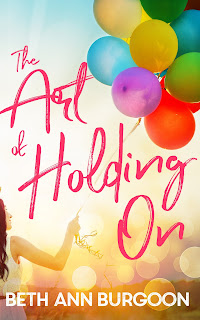 Beth Ann Burgoon is the new pen name of Beth Andrews for her young adult (YA) novels. I read her debut YA release, Counting Flowers, last year, so when I learned she had a second book coming out this year, I knew I had to check it out as well. The Art of Holding On is the story of Hadley Jones, a seventeen-year-old who knows better than to hope for and expect more from life. So, it was perfectly understandable why she had a feeling her friendship with Sam Constable, one that she cherished, would implode sooner or later. They were opposites and it always seemed as if their lives were headed in opposite directions, but Sam always made it clear how much Hadley meant to him. Then he kissed her and shared his feelings for her--feelings that she returned. However, she doubted they had any sort of future together, breaking Sam's heart in the process. He leaves in anger, choosing to live with his father, distancing himself from Hadley and ending their friendship. A year later, Sam's back and wants to rekindle their friendship and make a push for more once again. But Hadley has yet to get over Sam's desertion, and even if they work things out, will Sam still want to be with her when he learns what transpired while he was away?

The Art of Holding On was a good read and happily met my angst quota. Hadley and Sam had the sort of connection that made it clear that they were always meant for more than friendship, but Hadley had her hang-ups, most of which were borne of what she had experienced and knew in life. These two had their fair share of issues, which I won't get into because I don't want to spoil the book for anyone out there who has yet to read it. It would be easy to get frustrated by some of their actions and reactions and exclaim what they should and shouldn't have done. However, it would be best to remember that these two were teenagers, and more often than not, teens can be reactionary. If Hadley and Sam were real people, I would have wanted to give them a sympathetic ear, a stern talking to, and a hug. They had a lot of growing up to do, and their situation was a matter of them deciding whether it was time to finally let go or to not merely hold on but to fight for what they shared. Beth Ann Burgoon's The Art of Holding On is the sort of book that anyone can appreciate, regardless of their age, and it gets four stars. ♥

Purchase The Art of Holding On on Amazon | Apple Books | B&N | Kobo.