Review: Fake You by MV Ellis (Boys of Trinity Hall #2) 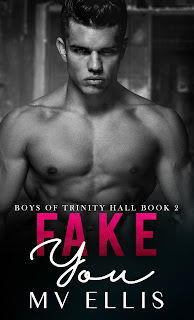 Note: An advanced reader copy (ARC) was provided by the author via Give Me Book Promotions.

“[N]o matter how hard you try, no amount of lying to me, yourself or anyone else is going to explain away this thing between us.”


When it comes to the bully romance trope, Fake You is the real deal! This particular trope's popularity ebbs and flows, depending on the time of year, and I've certainly read my fair share. Some titles have stood out, both for good and not-so-good reasons. Because a handful have raised the bar, I've become more discerning, and so far, MV Ellis's Boys of Trinity Hall is a standout. Two books in and this author, who was totally new to me until I discovered her writing via Break You, the Boys of Trinity Hall series starter, back in October of last year, continues to leave me gobsmacked with how intense her story lines are yet as the layers that surround the main characters are peeled away, the vulnerability that's there is what stays with me most. I was honestly a wee bit worried after reading the first book in the series because it had set the bar incredibly high for whatever follows. Well, I needn't have worried.

Fake You is an enemies-to-lovers romance and is about Kristina Sanchez and Andrew Cavanaugh, better known by their nicknames of Kik and Drew and both of whom were introduced in the series starter. At first glance, you would never consider Kik and Drew as two people who had anything in common. Well, these two are fake. They plied others with the lies they believed were necessary, whether it be to keep up a certain persona or to simply get ahead. Their paths intersect when Drew's father orders him to put a stop to Kik's blackmailing, but if Drew thought accomplishing the task was easy-peasy, he underestimated just how much of a real distraction Kik was going to be.

MV Ellis's writing was so darn on point in this book! With two main characters who had tension from the moment they meet, you would think it would be difficult to maintain that sort of thing from start to finish, but nope! Ellis took on the challenge and has come up with one heck of a fantastic read that had me eagerly flipping from one page to the next, needing to find out how Kik and Drew and their relationship would evolve. This isn't a hearts-and-flowers romance, but it is chock-full of hate and love and everything in between, including lust, passion, revenge, and deceit. This book could probably work well as a standalone, but I'm going to highly recommend that you read Break You before Fake You because there are recurring characters. I'm awarding Fake You five-plus stars. ♥

Read my reviews for the Boys of Trinity Hall series:

Break You (book one) - five-plus stars - My Review

Fake You (book two) - five-plus stars - My Review (posted above)

Purchase Fake You on Amazon.