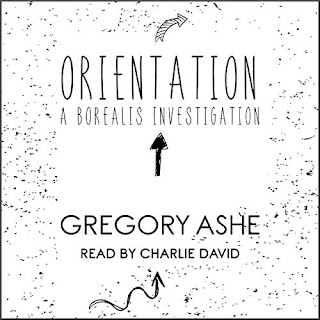 Gregory Ashe was an author who came highly recommended to me by my friends who adore M/M romance as much as I do. I can't believe it's taken me THIS long to finally dive into a story of his, but given that Orientation is the first in the Borealis Investigations series, I decided this was the best time to discover his writing without me whining and complaining that I'd have to do a lot of back list reading. Funnily, after listening to this audiobook, I've decided to check out Ashe's audio back list via the first three audiobooks in his previous series, Hazard and Somerset, which is the same series my friends have been encouraging me to check out for the past couple of years, while I'm still on my three-month trial run with Audible Escape.

Orientation introduces listeners to North McKinney and Kingsley Shaw Wilder Aldrich, best friends and co-owners of Borealis Investigations. With the future of their business in limbo after an incident that finds North with a suspended PI license, North and Shaw know that they need to say "yes" to the next case that comes their way, and that just happens to be a case of blackmail. Matty Fennmore may be gay but there's no way he can come out of the closet, not with his family being as conservative as they are, so being the victim of blackmail has him in dire straits. But there's more going on than meets the eye, and when all is said and done, solving the case may end up costing North and Shaw more than they bargained for.

Color meintrigued! Gregory Ashe has penned a story that had me on my toes from start to finish. I was totally curious about the case itself, as well as the relationship between North and Shaw, one that clearly had history to it. This was heavier on the mystery and suspense than on the romance, but the inklings that were there made it obvious that Ashe was slowly building towards something, and I guess we'll delve deeper as the series progresses. With as far as the narration goes, Charlie David isn't my favorite narrator for the same reason I'm not a Sebastian York fan--they both sound lackadaisical--though I know they're favorites of other listeners. Five stars for the story, three for the narration, so overall, four stars for Orientation. ♥