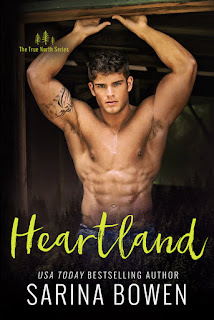 Sarina Bowen takes fans and readers back to Vermont with the seventh novel in her True North series. Inasmuch as the book could work well enough as a standalone, this it the part where I'm going to beg you to read the books in order. Not only is this series a personal favorite--for good reason!--but there are also recurring characters throughout. I promise, you won't regret venturing into the awesomeness that are the Shipleys and their friends and neighbors. Just for clarification, not all of the books are about the Shipleys--so far, there are only three novels.

Book number seven is a friends-to-lovers romance between twenty-year-old college sophomore and dairy farmer Dylan Shipley and twenty-one-year-old college freshman and polygamous cult escapee Chastity Campbell. Dylan is living college life to the fullest, earning a reputation for being the sort of guy who goes through girls without making false promises or with any regret. But now he's got a girlfriend, and she just happens to be Chastity's roommate. What's a girl to do when the boy she has it bad for refuses to see her as anything more than a friend?

Suffice it to say that there's a whole lot more to Dylan and Chastity than meets the eye--as it should be! I love the fact that these two are layered and complicated and walking contradictions, which made it oh-so-easy for me to relate to and empathize with them. Yes, Dylan is every bit the young guy who has no qualms sleeping with different girls but he's honest about his intentions--or lack thereof--and seeing the side of him as the still grieving son and conflicted brother highlights that he's more than your usual college-aged dude who only thinks about sex.

As far as Chastity is concerned, she may be a year older than Dylan, but the first nineteen years of her life were shaped by the dictates of Paradise Ranch, the cult she was born into (and the same one Zach Holtz from Keepsake, book three in the True North series, and Josh Royce and Caleb Smith from Goodbye Paradis, book one in the author's Hello Goodbye duet, were part of). She was trying to reconcile her wants and desires with what she had been indoctrinated into for most of her life, but I loved how she got a firmer footing with her life beyond Paradise.

Dylan and Chastity were barely in their twenties and I appreciated the fact that they weren't made into overly ideal and idealistic main characters. They were still coming into their own and were bound to have missteps along the way! I liked that nothing about the development of their relationship was rushed and that the story touched upon Dylan's complex issues with regards to his family. I won't get into it because no spoilers! My advice? Go read Heartland already. Sarina Bowen's latest novel receives five stars. Fingers crossed for more from her book universe! ♥