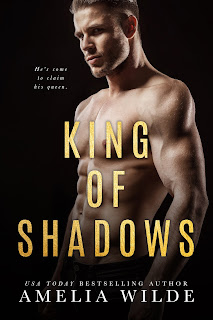 My introduction to Amelia Wilde's writing was by way of Audition, co-written with Skye Warren, who happens to be one of my favorite go-to authors. Well, my curiosity was absolutely piqued, so when the opportunity to read and review her upcoming release came along, I knew this was my chance to discover her writing as a solo author. King of Shadows is the first novel in Wilde's new series inspired by the Greek myth of Persephone and Hades. Here, Persephone is a young woman who has been sheltered from the world, raised to believe that evil will befall her in the company of men. She desperately wants her freedom, but even as she begins to break free of her mother's dictatorial ways, she's captured by her family's sworn enemy. Luther Hades is the very kind of man her mother told her about. He's cold and cruel, but maybe all he's needed is the love and warmth that Persephone can bring him...

This book was exceedingly more than I could have hoped for. I love "meeting" new authors, and while I've read Amelia Wilde when she and Skye Warren penned a previous book, getting to experience her writing on its own has been a rewarding experience. I love mythology, particularly Greek mythology, so this book was totally up my alley, and Wilde did a superb job, not only bringing it into the twenty-first century but also by giving it her own spin while maintaining the integrity of the core myth of Persephone and Hades. Now, do you need to know the actual myth? Not really, although I do think having some knowledge of it gives you a better appreciation for Wilde's take on it. Persephone and Luther are are very much a study in contrasts, but they do fill each other's gaps. Now, the myth has its own ending, and I'm curious to see if Wilde will have her main characters' story play out the same way or if she'll employ her own artistic license and knock the original myth on its head. Whatever happens next, I'm definitely going to be waiting anxiously to see how it all plays out in book two. King of Shadows receives five stars. ♥