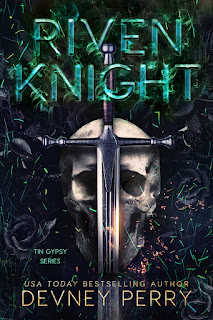 Last night, I'd fallen asleep in his arms.

And last night, I'd stopped pretending I wasn't in love with my husband.


I have been itching to get my hands on Genevieve Daylee and Isaiah Reynolds's story from the moment I was done with the Tin Gypsy series starter, Gypsy King. After the events in book one, as well as that peek into what could be awaiting Genevieve and Isaiah in book two, I needed to know how everything would play out, and suffice it to say, Devney Perry penned one hell of an intriguing story in Riven Knight. Because there's one particular story line that was left unresolved the first book that carries over in this second book, I highly recommend that Gypsy King and Riven Knight be read in order. Trust me, you'll be happy you did because both books are so intoxicatingly addictive.

When Genevieve Daylee and Isaiah Reynolds get married, it isn't out of love--it's out of necessity. The twenty-seven-year-old paralegal never thought she'd leave behind the life she'd built for herself in Colorado to head to Montana after the murder of her mother. Now, she has a husband who is both her savior and a stranger, meets the father she never knew, keeps her distance from one half-brother who hates her, and must keep her cache of secrets while also staying aware of a killer who is still targeting them. Genevieve knows her thirty-one-year-old mechanic husband will protect her from harm, possibly even put his own life on the line, but will Isaiah be able to protect his wife's heart from breaking when she's unable to scale the fortified walls he's erected around himself?

Ah, this book... From the moment I began reading it, there was simply no putting it down. Genevieve and Isaiah's story had me mesmerized. These two were essentially stuck together for the foreseeable future, and it wasn't as if getting to know each other was a given, even with the life-changing manner in which they'd met. I loved seeing them build their relationship from the ground up--earning the other's trust and becoming comfortable with one another. Nothing was rushed, which I appreciated, and along with the evolution of their relationship from strangers to friends to lovers and more, one thing remained: Genevieve and Isaiah rescued each other in more ways than one. The suspense and mystery elements were superbly done by Devney Perry, and she maintained a much-needed balance between those and the romance. I shed tears over Riven Knight, which gets five-plus stars. ♥